The Evil Wiki
Register
Don't have an account?
Sign In
Advertisement
in: Mature, Evil Lairs, Evil Realms,
and 9 more

To bring any person or animal buried within it back to life as the flesh-eating undead version of themselves.

The Pet Sematary is the central villainous plot element of Stephen King's 1983 horror novel and 1989 film of the same name and its 1992 sequel Pet Sematary. It is an ancient Native American burial ground behind its neighboring present-day animal graveyard of the same name that has become cursed - causing anything that is buried there to return to life as zombie-like beings that are violent and cruel. The name "cemetery" is deliberately misspelled.

In the novel, the Pet Sematery is a primitive burial site supposedly used by a Native American tribe known as the Micmacs (Micmaqs) - however it was also suggested that it was used to bury the victims of cannibalism and as a result became haunted by the Wendigo, a demoniac creature that is said to be of Native American folklore.

In the film, the Creed family moves into a new home, close to a road where high-speed truckers often carelessly drive by. They befriend their neighbor, Jud Crandall, who tells them about a pet cemetery and the burial grounds nearby. Louis Creed, working at the University of Maine at Orono hospital, is treating a car accident victim named Victor Pascow, who dies on the operating table, but not before suddenly grabbing Louis and whispering a mysterious and cryptic message to him just before expiring. That night, in what is seemingly a dream, Victor visits Louis in his sleep, warning him about the burial ground. Louis wakes up to find his feet covered in dirt. Church, a British Shorthair cat owned by Louis's daughter Ellie, is run over by a truck on the road in front of their house while Rachel, Ellie, and Gage Creed are in Chicago. Jud takes Louis to a burial ground beyond the pet cemetery they visited earlier. He buries the cat underneath a cairn. Church is brought back to life, but as an evil shell of himself; he attacks Louis and reeks of decomposition. Jud tells Louis about the grounds. Louis asks if a person was ever buried in the grounds.

Sometime later, Louis's young son, Gage, is tragically run over by a truck on the same road during a picnic and is killed, and Louis screams in agony over the death of his son and looks back to his photos of Gage. Louis considers burying Gage in the burial grounds. Jud tries to dissuade him from doing so, telling him about a young soldier from town, Timmy Baterman, who died in service during World War II. His father, Bill, placed his son's corpse into the Micmac burial ground, only to have it reanimate and terrify the townsfolk. Jud and three of his friends tried to save Bill and burn down the house with the son in it, but Bill was attacked by Timmy, both perishing in the fire. Jud believes that the place made Gage die because he introduced Louis to it. Ellie and Rachel travel to Chicago, but Ellie is reluctant, as she had a bad dream about her father, Gage and Pascow. She begs Louis to go with them, but he declines. Louis heads to the cemetery Gage is buried in, intending to exhume his son's body. He is met at the graveyard by Victor, who tells him the barrier was not meant to be crossed, and that the ground is sour.

In Chicago, Ellie has a nightmare, stating that Victor warned her that Louis is going to do something really bad, and that he is trying to help because Louis tried to save his life. Rachel, with a little help from Victor, whose spirit is still inside the house, realizes who her daughter is talking about and calls Jud after Louis does not answer the phone. She asks if he has seen Louis, and then tells him she is returning. He warns her not to, but she has already hung up. Louis digs up Gage's body, taking his son's corpse to the burial ground. Victor's spirit once again tries to stop Louis, but he buries Gage at the Micmac grounds. Louis returns home, exhausted from his activities. Gage later arrives and enters his father's room, removing a scalpel from one of his bags. He heads for Jud's house, and after playing a game of hide and seek with the old man, slices Jud's Achilles tendon, slashes his mouth, and rips his throat out, while Church watches. Rachel arrives home, hearing something that sounds like her late sister, Zelda, calling her name, then Gage's laughter. She enters Jud's house to find Gage, dressed in one of Jud's old hats and one of his canes. He tells her he brought her something, and shows her Louis's scalpel. Thinking nothing of it, Rachel hugs her son in disbelief, and is stabbed presumably through the eye.

Louis wakes up to find Gage's muddy footprints on the floor, his doctor's bag opened and his scalpel gone. He receives a call from Gage saying, "Come play with me daddy! First I played with Jud, and then I played with mommy. We had an awful good time. Now I want to play with you." Preparing shots of morphine, Louis heads to Jud's house, running into Church once more. He distracts the cat with a raw steak, then gives him a shot of morphine, killing the cat almost instantaneously. He heads into the house, once more taunted by Gage, and prepares the second shot of morphine. Louis searches the house only to have Rachel's corpse fall from the attic, hung by her neck. Gage leaps from the attic door, biting and stabbing Louis. Finally getting his reanimated son off him, Louis grabs a morphine shot. Gage heads for him again, scalpel in hand, but Louis injects the boy with the shot. Gage walks away muttering, "No fair", until he slumps against a wall, dead. Louis soaks the house in kerosene and sets it on fire, carrying his wife's body out. Victor watches, knowing what he is doing, and tells Louis he is sorry, and not to bury Rachel in the same place. The now-insane Louis replies that he waited too long with Gage, and that it will work with his wife because she just died.

Louis plays solitaire at home while he waits. At midnight, an undead Rachel comes through the kitchen door, walking towards her husband. She coos, "Darling..." and the two embrace, kissing. Rachel reaches for a knife on the kitchen table and grabs it slowly. The screen blacks out as Louis screams.

In the sequel, after the the accidental death of his mother, Renee Hallow Matthews, during production of a movie, Jeff Matthews moves with his veterinarian father, Chase, to Ludlow, Maine to live in the family's summer house. Jeff learns about the Creed family and the cursed Indian burial ground. After his friend Drew's dog, Zowie, is shot by Drew's stepfather, Gus Gilbert, the town sheriff, Jeff and Drew bury Zowie at the burial ground. The dog returns from the dead, but is unusually fierce, and his eyes have an unnatural glow to them even in daylight. Zowie is treated for his gunshot wound by Chase, who finds that the wound is not healing and Zowie has no heartbeat. Chase sends a blood sample to a lab and learns that Zowie's cells have completely deteriorated and are no different from those of a dead canine.

Jeff and Drew went to the woods outside the Pet Semetary on Halloween with the other boys from school for a night of horror stories about the Creed tragedy before when Gus comes looking for Drew and punches him. Before Gus can hit his stepson with one of the gravemarkers, Zowie rushes out of the shadows and kills the abusive, overzealous sheriff with a bite to the jugular. The boys bury Gus in the burial ground. Gus returns to life, but now exhibits stiff movements and at first treats Drew more fairly and generally is silent. But he becomes more crude and sadistic, such as when he sexually assaults Drew's mother, or when he brutally skins his pet rabbits for supper.

Zowie and Gus both start acting more violent. Zowie breaks out of the veterinary clinic and kills three cats before entering Chase's home and attacking him. Chase survives with an injured arm, but is shaken. Jeff and a bully, Clyde, get into a fight in a ditch. Jeff is about to have his nose cut off by the spokes of his own bike when Gus shows up. Gus orders Jeff to go home, then kills Clyde with his own motorcycle (his scarf gets caught in the moving rear-wheel, fatally cutting into his face) while Drew watches.

Gus traps Drew inside his house with Zowie, who has gone completely savage. Drew escapes through an upstairs window and gets in the car of his arriving mother. Gus chases them down the highway with his police car, killing them by forcing them to collide with a truck. Gus returns to Clyde's corpse with a police shovel and body bag, saying "I'm takin' you up the hill, Clyde, buddy. That's the way the Indians did it."

Jeff becomes obsessed with reanimating his mother. He has Gus exhume her corpse, and meets him at the Indian burial ground to re-bury her. His father is told that his wife has been removed from her grave by Gus. Chase rushes to Gus's house and is attacked by Zowie but manages to kill the undead dog. He enters Gus's house only to find the dead man waiting for him. Shooting Gus in his chest has little effect on him, and just as Gus is about to kill Chase with an electric drill, Chase retrieves his gun and shoots Gus through the head, killing him.

Jeff's mother has come back to life. She stabs and kills Chase's housekeeper, Marjorie, in the attic. Chase arrives and finds Marjorie's body as well as his son embracing his undead wife. He is unmoved by Renee and tells Jeff to get away from her. An undead Clyde Parker then arrives armed with an axe, and fights Jeff again. Chase is knocked out, and Renee locks everyone in the attic and sets the place on fire. Jeff defeats Clyde by sticking a severed electrical cable in his mouth, blowing off his head.

As they escape Renee tries to convince Jeff to stay by muttering, "I love you," but Jeff gets himself and his father out of the attic, leaving his mother to die in the flames. As Renee burns she chants "Sometimes Dead Is Better" which is a reference to the first film. Jeff and Chase move out of Ludlow to start a new life back in Los Angeles while leaving behind the nightmare that began in its place of birth, Pet Sematary.

References In Other Fiction

Pet Sematary has become a parody a couple of times in both MADtv and South Park.

The dimensional portal was spawned because the owner of the pet store drunkenly dug up a bunch of graves, pissed on them, buried them upside down, and then built a pet store on top of them.

The rock band the Ramones created a song as part of the film adaptation - which would become popular and tells with surprising accuracy most of the themes found in the book and film, mentioning such things as "ancient goblins and warlords" (a reference to ancient burial grounds) and Victor (a ghost who, although frightening, was trying to stop the evils of the cemetery). 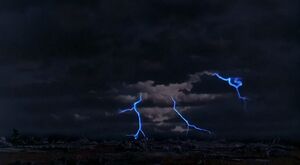 The Burial Ground
Community content is available under CC-BY-SA unless otherwise noted.
Advertisement