The Pig Star is an orbiting spikey space station with a frontal surface shaped like a deer-pig's face that is sentient superweapon and it is the main antagonist of the 1993 sci-fi fantasy side-scrolling platformer videogame Rocket Knight Adventures. In the distant past, the Pig Star was used by invaders during their attempt to conquer the land of Zebulos. Despite being sealed away, the Pig Star's on board computer remained active and began to facilitate the means of its return.

Devligus then founded the Devotindos Empire with the purpose of invading Zebulos and unsealing its creator. The Emperor sent the rogue Rocket Knight, Axel Gear, to kidnap the daughter of the Zebulan king, Princess Sherry, so he could force the king to give up the key to the Pig Star. Unbeknownst to him, Sherry was the only one who knew where the key was. Devligus eventually recovered the key and set off to unseal the Pig Star.

On easy mode, Sparskter will safely make it to the surface of Planet Elhorn, but on hard mode, however, the Pig Star's core will chase after Sparkster and attempt to destroy him one last time. Eventually, though, the core will burn up in the atmosphere, allowing Sparkster to escape and return to Zebulos. 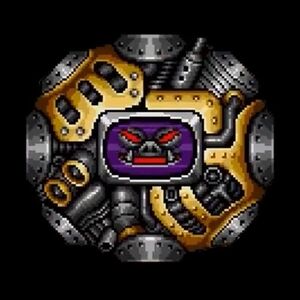 The Pig Star
Add a photo to this gallery
Retrieved from "https://evil.fandom.com/wiki/Pig_Star?oldid=65543"
Community content is available under CC-BY-SA unless otherwise noted.