Pilaf's Castle (in Japanese: ピラフ城), also sometimes called "Pilaf Castle" is a fortified palace that was once the main residence of both Emperor Pilaf and the Pilaf Gang. It was located withinin the west part of Diablo Desert outside the Mushroom Forest and it was turned into a pile of rubble by Goku when he looked at the full moon and became a Great Ape. The castle was built by Pilaf over a period of several years.

The first floor of the castle is a dark maze filled with many traps and can be viewed by Pilaf in his control room. There is also an entire room that is a giant pinball machine, which is a trap for intruders (this room was only seen in the anime filler episode "The Penalty is Pinball"). Pilaf has his throne room where he eats and is visited by Shu and Mai to report him their failures. There is apparently only one bedroom that all three of them share, as all three of their beds are in the same room.

The castle has also a hangar where airplanes are launched and a weather control device above it for Pilaf to make a thunderstorm happen to shock Shu and Mai after they fail their missions. Pilaf even has a giant incubator where he keeps prisoners to die out in the heat, as he was going to do to Goku and the others after they ruined his wish. The castle has been seen to be patrolled by Shu's pet wolves.

After the complete destruction of Pilaf's Castle, Pilaf resorted to other bases he inherited, like a flying fortress and an airship. Pilaf, Shu and Mai were seen near the castle's ruins during the Dragon Ball GT episode "Piccolo's Decision" when Goku took them to New Planet Plant before the Earth's explosion.

In two extra stages of Dragon Ball: Origins, Pilaf rebuilds his castle and creates new evil plans: the first time, Pilaf invites Goku in the castle in an attempts to eliminate him before he becomes too much of an obstacle (level 6-5), while the second time he gets Ranfan to join him in the castle after the 21st World Martial Arts Tournament and terrorize a nearby village with her help (level 6-6).

In Daimaō Fukkatsu, Goku investigates the "New Pilaf Castle" (新ピラフ城) after the death of Krillin at the hands of Tambourine. There, he fights with Pilaf and his gang in their Fused Pilaf Machine.

In the opening for Dragon Ball Online, a group of fighters are seen looking at a castle similar to that of Pilaf and which is perfectly intact. The castle seen is possibly Paella's castle, or the group could have been on a Time Travel Quest. 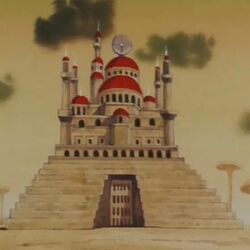 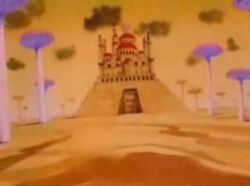 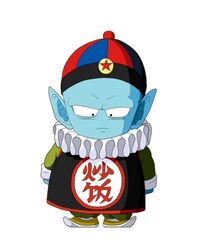 Emperor Pilaf
Add a photo to this gallery
Retrieved from "https://evil.fandom.com/wiki/Pilaf%27s_Castle?oldid=45600"
Community content is available under CC-BY-SA unless otherwise noted.