The Evil Wiki
Register
Don't have an account?
Sign In
Advertisement
in: Contradictory, Evil Lairs, Prisons,
and 9 more

The Pleasure Island (in Italian: "Piacere Isola") is a cursed amusement park on an isolated isle and the most infamous location in the 1940 animated Disney film Pinocchio based on the classic Italian children's novel The Adventures of Pinocchio by Carlo Collodi which it is a fictitious location in and known by it's original name "Land of Toys" (in Italian: "Paese dei Balocchi").

Located within the fictitious land of Cocagne, the Pleasure Island serves as a haven for wayward boys, allowing them to act as they please without recrimination. However, the truer and more sinister purpose of Pleasure Island is eventually revealed as it begins to physically transform the boys into donkeys, apparently by means of a curse.

This park was owned and operated by the Coachman, who made a fortune from his crooked deeds, and is seen in the film when the Coachman brings Pinocchio, Lampwick and a coachload of other boys to the park. It is implied to be an illegal theme park, hinted by Honest John during the meeting in the Red Lobster Inn, where he reacts in horror at the name.

On its surface, Pleasure Island seemed like any other amusement park, except that it was one where the young boys brought there by the Coachman were encouraged to behave badly. Among the places where the boys could misbehave were the Roughhouse, where they were encouraged to fight each other senselessly, the Model Home, which was open for vandalism and destruction, and a pool hall with billiard tables and playing cards and chips, presumably for gambling. Food, alcohol and tobacco were made freely available.

The park, unknown to the children, harbored a terrible curse that turned little boys who "made jackasses of themselves" into real donkeys. After the henchmen had locked the gates to Pleasure Island shut to trap the boys in the amusement park and they had spent enough time misbehaving and overindulging in the park, the curse would gradually transform the boys into donkeys; still with their human minds, but donkeys in every other way.

Braying replacing normal laughter came first; ears and tail came next; then the face was transformed, followed by the extremities and torso; then the boy would fall to all fours and finally, the voice was replaced by full braying. These donkeys were then stripped of their clothing by the Coachman or themselves would break their clothes due to kicking and braying so loudly and placed into crates where they would eventually be sold into slavery in the salt mines, the circus and other places to make the Coachman and his minions more money.

Apparently, being less of a 'jackass' could slow the curse's process of transformation, and presumably the island's curse did not affect those who are sensible and well-behaved, since it does not affect Jiminy at all, which was why only stupid, badly-behaved boys were brought to the island.

The curse seems to only affect children since it didn't affect The Coachman or his henchmen. The Coachman tested each donkey, asking each one what his name was. Donkeys who could still talk were placed in a separate pen, and presumably kept there until they either lost their ability to talk, or send them all home while being kept by the Coachman to pull his stagecoach.

Pinocchio narrowly avoided being transformed into a donkey, and escaped the island by diving into the ocean, though he still sprouted a donkey tail and ears. However, Lampwick and all the other boys were not so lucky, and were transformed into donkeys in one of the most notably terrifying sequences in Disney history.

In Italy, where the original story was written, the donkey is a symbol of stupidity. The moral behind Pleasure Island is that little boys who scoff at education and moral codes set forth by their parents, preachers, and authority figures, and instead engage in "jackass" behavior such as fighting, vandalism and underage drinking, are often destined to grow up to become men who have no option to make a living except through backbreaking manual labor, and there are plenty of people in the world like the Coachman who will take advantage of that.

The Pleasure Island theme was taken up again by sci-fi author Cory Doctorow in his short story "Return to Pleasure Island", where it is told from the perspective of cotton-candy-vending Golems.

The 1990 film Teenage Mutant Ninja Turtles appears to pay tribute to Pleasure Island by showing an underground lair ran by the antagonistic Foot Clan, being a place of underage drinking, smoking, gambling, blasting offensive music and playing video games. The only skills that are taught are martial arts and how to move stolen goods.

Pleasure Island made an appearance in the 1996 platform puzzle adventure game Disney's Pinocchio based on Walt Disney's 1940 animated feature film of the same name.

The Pleasure Island is featured in the 1996 Steve Barron movie The Adventures of Pinocchio, and it is called "Terra Magica" (which means "Magic Land" in Italian) in this version. After Pinocchio's initial adventures, he ends up wandering in the woods where he encounters the human thieves Volpe and Felinet who trick him out of his money. After this betrayal, he is then lured onto a carriage driven by a sinister-looking coachman who takes him to Terra Magica with a load of other boys (including Lampwick, Pinocchio's friend). Terra Magica is actually owned by the evil Lorenzini, who is luring the boys to the place with promises of fun and then turning them into donkeys through drinking the park's cursed water while riding on a rollercoaster. Lorenzini's evil schemes are thwarted when Pinocchio reveals his plans and encourages Lampwick (turned into a donkey) to knock Lorenzini into the Park's cursed water, transforming him into a monstrous whale. Around the end of the movie, Volpe and Felinet are tricked to drink the water by the human Pinocchio who tells them that if they drink the water while holding a rock, it will transform it in pure gold. As result, the two thieves are turned into a real fox and a real cat (though this scene happens offscreen). It said that the boys that were turned into donkeys were turn back to boys after doing hard and honest work.

The Pleasure Island is shown once more in the 2000 TV musical Geppetto. After Pinocchio escapes from Stromboli's puppet show, even though Stromboli kept him under a contract he signed, he boards a stagecoach full of boys to Pleasure Island. There, young boys break windows, eat cakes, pies, and candy for their suppers, play in the mud, run wildly, steals toys, and play pool. In this version, a rollercoaster turns the boys into donkeys, much like in the 1996 film version.

In the 2002 Italian film Pinocchio, the Pleasure Island is referred to as "Fun Forever Land" and plays the same role as the novel version.

The Pleasure Island appears in Kingdom Hearts 3D: Dream Drop Distance, in the world Prankster's Paradise and it is also a Sleeping World in the game. It includes various areas of the Island that are found in the original film, as well as new areas like the Circus tents.

Areas and Points of Interest 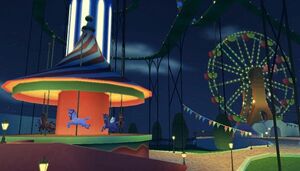 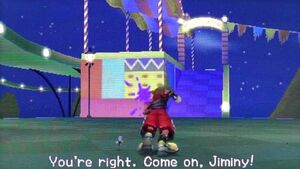 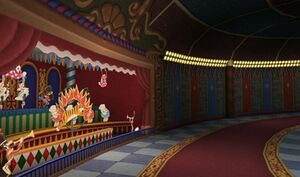 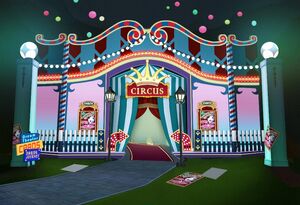 The main entrance to the Circus. 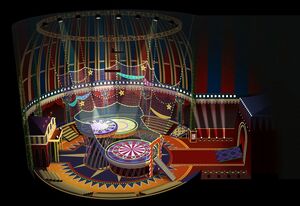 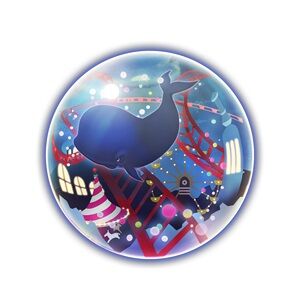 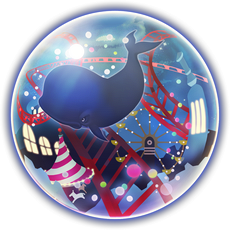