Polybius is a fictitious arcade game that originated from an urban legend created in 2000. The original game's actual existence has never been authoritatively proven, but it has served as inspiration for several free and commercial games by the same name.

The urban legend Polybius was of an unheard-of new arcade game appearing in several suburbs of Oregon in 1981. The game is described with lines forming around the machines often resulting in fighting over who would play next.

Approximately one month after its supposed release in 1981, Polybius is said to have disappeared without a trace.

The company named by writer Brian Dunning as "not-quite-idiomatic German" meaning "sense delete" or "sensory deprivation". These meanings are derived from Sinne, "senses" and löschen, "to extinguish" or "to delete".

The owner of coinop.org submitted a number of individuals came forward claiming to have some involvement with Polybius. In 2006, Roach, a boy experienced an epileptic seizure while playing, and the cabinets were withdrawn by the company in a panic. 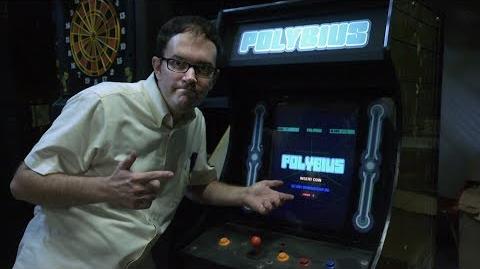