The Evil Wiki
Register
Don't have an account?
Sign In
Advertisement
in: Villainous Tools and Other Items, Contradictory, Magic,
and 4 more

Poppets are a form of magical effigy similar to voodoo dolls which can be used for good, neutral or evil - dating back to the time of ancient fertility cults and primitive in mankind's distant past they have since become heavily associated with folk magic and hexcraft, poppets became the weapon of choice for the vengeful Orell Peattie, the central antagonist of the X-Files episode "Theef".

A doctor and his family find themselves plagued by horrific deaths and misfortune, which are soon discovered to be the work of a mysterious man known as Orell Peattie: at first puzzled as to why the mad mystic was causing such chaos, it was soon revealed that Orell's daughter had been involved in a terrible car crash and the doctor gave her a lethal dose of morphine as a form of mercy killing to end her suffering. This act however served to infuriate Orell, who became convinced the doctor had stolen his family (hence his calling card of "Theef").

When Special Agents Mulder and Scully were assigned to the case the pair were largely powerless against Orell's particular branch of magic as he was using a type of voodoo doll-esque magic known as Poppets to commit his gruesome murders, which involved such feats as causing a victim to burn alive via putting a Poppet in a microwave and even making Scully temporarily blind.

However, Mulder ultimately managed to exploit the nature of hexcraft and broke Orell's control over the Poppets, which gave Scully her sight back long enough for her to finally shoot Orell, ending his rampage and saving her life as well as that of the surviving doctor's family: Orell was left hospitalized, it is unknown if he ever returned to using Poppets again but given his nature it is very probable he did, leaving for a frightening prospect of a possible return (though it never occured).

A poppet is a vaguely humanoid doll made from simple cloth stuffed with herbs and containing varied roots, herbs and other mystical ingredients: they are rather unintimidating in appearance unless one is aware of the mystical significance (or opens it up, for inside the poppet is usually a picture of a victim and a lock or hair or other personal possession, which allows the mystic to perform the magick (good or evil) ). Yet, it is also said that poppets can maybe fashioned from such others materials as a carved root, grain or corn shafts, a fruit, paper, wax, a potato, clay, or branches.

Poppets can bestow fertility and good fortune if used by neutral or benevolent mystics, but when used by evil-minded mystics, they become lethal tools of vengeance, much like a voodoo doll it is believed any damage done to a poppet will cause equal (or sometimes worse) harm to whoever the mystic wishes said curse upon. 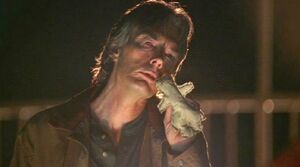 Orell shows off his Poppet 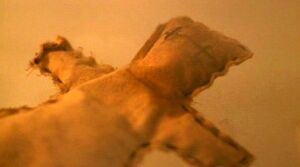 a basic Poppet (of the cloth variety) 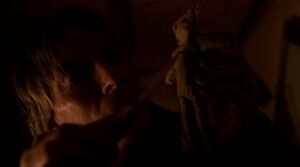 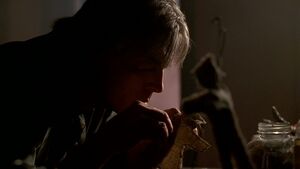 Orell in the process of creating a Poppet.