To animate inanimate objects upon contact and absorb responded emotional energy from living beings as well as to allow supernatural beings to flood the world of the living.

To aid Vigo in his sinister scheme to doom the mortal world (formerly; failed).
To aid the Ghostbusters in their fight to keep New York safe from paranormal dangers.

The Psychomagnotheric Slime (also known as Mood Slime and Psycho-Reactive Slime) is a powerful psycho-reactive substance that plays a major antagonistic role in Ghostbusters II and Ghostbusters: The Video Game and it responds to human emotional states, both positive and negative, from which its reactions depends. Its main characteristic is an ability to open portals for not just ghosts, but also demons and other supernatural entities to enter the world of the living, and it can also animate objects.

The origin of the Mood Slime is tied to a juvenile Sloar, held in Shandor's Island, beneath the Hudson River. Before his death, Ivo Shandor and the Cult of Gozer had somehow lured the young Sloar from its home hell dimension and imprisoned it in our world within a Ghostworld pocket at the heart of Shandor's island mansion. Fueled by hatred, bile and anger the creature produced a steady stream of Black Slime.

Ivo Shandor, through experimentation and using equipment decades ahead of it's time, converted the Black Slime into what became known as the Mood Slime, which was then pumped directly into New York's sewers and abandoned tunnels, possibly as a means to help the destructive Sumerian deity, Gozer to cross over to our world. This act was later used by the soul of a dead 15th century Carpathian tyrant named Vigo to his own advantage.

Ray Stantz and Egon Spengler conducted many tests on it to see how it reacts to different behavior. The tests included shouting, and insulting its weak electro-chemical bonds; as well as talking and singing to it, saying supportive nurturing things, and (in Egon's case, to the shock of the others) sleeping with it. Psychomagnotheric slime also has kinetic properties; it can cause a toaster to dance, or a bathtub to eat a baby as seen in Dana's bathroom. The slime also could be used by ghosts to enter the real world or boost their own power. The slime concentrated in New York beneath the streets was under the control of a powerful spirit, Vigo, who used it to gather more power, form a shell of slime over the museum, and even used the slime to try to abduct Oscar. As the slime was building up in under the city, it fed and grew in the old pneumatic transit lines due to the hostility and general negative emotions of the average New Yorker.

Direct contact with this slime had the effect of filling a person with the negative emotions that it stores. Slime can also be positively charged. In this state, it can be used to move large monuments, small toasters, or even rid someone of a possession. The Ghostbusters used it in their Slime Blowers to animate the Statue of Liberty and also to free Dr. Jahosz Poha from Vigo's control. Under Vigo's influence, negatively charged slime could even become aggressive enough to attack a person (as seen in a scene where Ray takes samples of it).

By 1991, Egon has further refined the substance into a more useful tool. Using his knowledge of spores, molds and fungus, Egon had developed an energetic, self replicating growth medium that can in theory provide an endless supply of positively charged slime and allowed for the Mark II Slime Blower to consist of only a small reservoir that can be attached to the standard Proton Pack. This is referred to as the Plasm Distribution System. The primary reason for developing this medium is as a counter agent for the caustic Black Slime, a super-saturated negatively charged form of Ectoplasm that can create portals across the 4th and 5th dimensions into the Ghostworld. As a side effect, the pigment of the slime has changed from it's original pink into a dark green and although most of it's "emotive", "portal-opening" and "animating" properties have been reduced, care still needs to be taken while using the slime around loud punk, heavy metal and hip-hop music.

According to Tobin's Spirit Guide

The standard response by most people to paranormal entities is often fright. I've seen some reactions to ectoplasm that run counter to this standard expectation. Some people, in fact, react angrily or become elated while others grow morose. I've isolated such incidents and can conclude that the ectoplasm residue in these cases is a subclass that seems to resonate and reciprocate human emotions.

Mood slime. With our recent breakthroughs in psychomagnatheric ectoplasm technology, we can align the valences of the substance to elicit a finely tuned range of emotions upon contact with a human target.

Don't get it on you...unless you're in a good mood.

The art page can be found in Shandor's Island, during the "Through the Good Slimes..." section. It is hidden inside a locker in the room Peter is being held in.

Psychomagnotheric Slime was used as a means to stop negatively charged objects, people, and ghosts as it neutralizes the negative energy and makes whatever it gets on to be inert. It was used in the Slime Blower in Ghostbusters II and in the updated Proton Pack in both versions of Ghostbusters: The Video Game.

After the battle with Vigo the Carpathian, the Ghostbusters collected the Psycho-Reactive Slime. Experiments proved it responded to a person's thoughts and emotions. It could also grant a person limited ghostly powers such as flight. Egon never could understand how it worked completely, though. The next year, the Ghostbusters utilized the last of the slime in order to rescue Janine Melnitz and Louis Tully on Janine's birthday from Poso. They recruited Poso's former associate Shifter to aid them. However, Shifter stated he could only smuggle one of the Ghostbusters into Ghost Town, Poso's base of operations. Peter Venkman was volunteered and covered in the slime, currently in a yellow hue. After the rescue mission was a success, it became apparent the slime grew fond of Peter. When Peter lost his temper, the slime changed its hue to red and skipped away with him in tow.

For a trip across the United States of America, the Ghostbusters took along several equipment including Slime Blowers. While in New Orleans, Peter doused an angry mob in positively charged pink slime so the Ghostbusters could move onto meet with their client. Peter later used a Slime Blower set on Slime Tether mode to neutralize the Phantom Big Rig.

A scoop of Mood Slime. 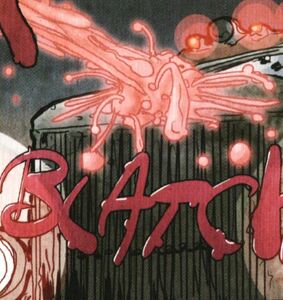 The Psycho-Reactive Slime as seen in the Ghostbusters IDW Comics. 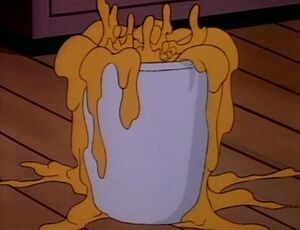 The Mood Slime in a plastic jar container.

Samples of the Mood Slimes in Williams-Sonoma glass jars. 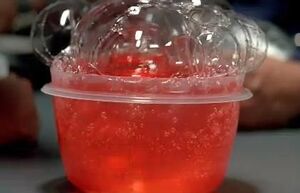 The Mood Slime
Add a photo to this gallery

Retrieved from "https://evil.fandom.com/wiki/Psychomagnotheric_Slime?oldid=47557"
Community content is available under CC-BY-SA unless otherwise noted.