Punch Clock Villain is a term used to describe most henchmen and villains by proxy who, instead of being actually wicked, are doing evil merely because it is their job. More often than not, they are shown as being regular people, who have normal social lives outside of their job, being totally sympathetic in comparison to their totally evil bosses.

Used to be an odd device but has become increasingly frequent due to the popularity of superhero parody, where minions are portrayed as sympathetic employees for unreasonable bosses. In addition, nearly all anime featuring a comedic villain usually has these, who are frequently cute characters.

Conversely, if played seriously, the emotional detachment that the Punch-Clock Villain displays when they knowingly contributes to various atrocities can be chilling, and audiences may see them as a monster. Depending on the nature of the story this trope can make a villain either more relatable to an audience or more hateful. If they are employed in a violent capacity, they may be an Apologetic Attacker or insist that it's Nothing Personal. Many Punch-Clock Villains may execute a heel–face turn at the very, very end of the film, should the Big Bad totally lose it. If they would rather pet an animal, they might be a minion; if they got into evil because the superhero team fired them for misbehavior, they may be a hero. People using this trope as an excuse for their crimes regardless of the truth of their claims, are "just following orders.

The term is a obvious reference to a punch clock, a clock device used on industry to control the employee's workday. 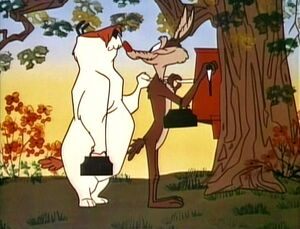 Ralph Wolf, getting ready for another laborious day of sheep-hunting.
Add a photo to this gallery

Retrieved from "https://evil.fandom.com/wiki/Punch_Clock_Villain?oldid=87166"
Community content is available under CC-BY-SA unless otherwise noted.