R'lyeh (pronounced /ˈɹu.li.a/ or /ɹɪl.ˈai.ɛ/) is a nightmarish supernatural city featured in the Cthulhu Mythos by famous author H. P. Lovecraft, which makes its first appearance in the 1928 short story "The Call of Cthulhu". R'lyeh is also referred to in Lovecraft's "The Mound" as "Relex". R'lyeh is a sunken city located deep under the Pacific Ocean and is where the godlike being Cthulhu of the immortal Great Old Ones is buried. R'lyeh's bizarre architecture is characterized by its non-Euclidean geometry.

When R'lyeh rises in Lovecraft's short story "The Call of Cthulhu", the only portion of the city that emerges is a single "hideous monolith-crowned citadel" in which Cthulhu is entombed. The human onlookers are awed by the sheer immensity of the city and by the frightening suggestiveness of the gargantuan statues and bas-reliefs.

The city is a panorama of "vast angles and stone surfaces [...] too great to belong to anything right and proper for this earth, and impious with horrible images and disturbing hieroglyphs." The geometry of R'lyeh is "abnormal, non-Euclidean, and loathsomely redolent of spheres and dimensions apart from ours."

In Lovecraft's stories, R'lyeh is sometimes referred to in the ritualistic phrase "Ph'nglui mglw'nafh Cthulhu R'lyeh wgah'nagl fhtagn", which roughly translates to "In his house at R'lyeh, dead Cthulhu waits dreaming.".

Lovecraft said that R'lyeh is located at 47°9'S 126°43'W﻿ in the southern Pacific Ocean. August Derleth, however, placed R'lyeh at 49°51'S 128°34'W﻿ in his own writings. Both locations are close to the Pacific oceanic pole of inaccessibility (48°52.6'S 123°23.6'W﻿), the point in the ocean farthest from any land. Derleth's coordinates place the city approximately 5100 nautical miles (5900 statute miles or 9500 kilometers), or about ten days journey for a fast ship, from the real island of Pohnpei (Ponape). Ponape also plays a part in the Cthulhu Mythos as the place where the "Ponape Scripture", a text describing Cthulhu, was found.

Charles Stross's novella A Colder War implicitly locates R'lyeh in the Baltic sea, describing Cthulhu as being "scraped from a nest in the drowned wreckage of a city on the Baltic floor.". In Nick Mamatas' novel Move Under Ground, it is located off the coast of California. 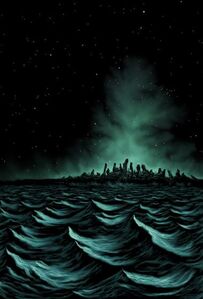 Arlyeh, the name of the island city of R'lyeh. 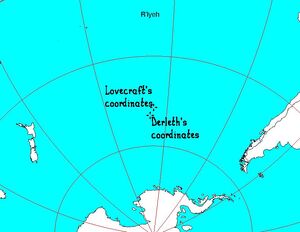 A map of R'lyeh in the South Pacific as described in the Cthulhu Mythos. 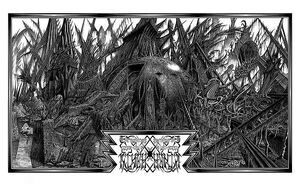 The city of R'lyeh as seen in the graphic novel The Haunter of the Dark and Other Grotesque Visions by John Coulthart. 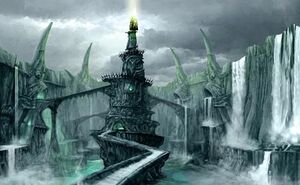 The city of R'lyeh.
Add a photo to this gallery

Retrieved from "https://evil.fandom.com/wiki/R%27lyeh?oldid=98854"
Community content is available under CC-BY-SA unless otherwise noted.