The Evil Wiki
Register
Don't have an account?
Sign In
Advertisement
in: Villainous Tools and Other Items, Magic, Paranormal,
and 6 more

To place a curse on the Romanov family on behalf of Rasputin.

Rasputin's Reliquary, also known as "The Reliquary", is an unholy, magical glass vial owned and wielded by the vile mystic Rasputin and it is featured in the 1997 animated Don Bluth film Anastasia.

The Reliquary is an 8-inch fancy, glass vial with a lid shaped like a human skull stabbed by a jeweled gold sword that hangs from a golden rope. It has a snake coiled around it.

Rasputin sold his soul in return for the power to destroy the royal Russian family known as the Romanov, then it turned into the form of the Reliquary. Rasputin tells Bartok his very existence depends on this talisman's safety. If it ever were destroyed, Rasputin would die.

Rasputin initially loses it, for a decade, after storming the Romanov party followed by the tragic events on the frozen river. After seeing the young girl escaping the Bolshevik siege with her grandmother, Rasputin waits atop the Alexander Bridge outside the now-abandoned Catherine Palace in hopes of taking her life himself. Clutching the reliquary in his hands, he jumps down on top of Anastasia, nearly missing her, which forces him to toss the reliquary aside in order to grasp the frightened Duchess by her snow-soaked foot. The reliquary lands harshly just past the girl, leaving it to be out of his reach once the ice breaks beneath him. Rasputin loosens his grip on the ankle as he attempts to maintain his wrath and reach for the reliquary, but he fails at both, letting the girl get away and sinking in the freezing currents.

Rasputin later tells Bartok that his very existence depends on the safety and protection of the reliquary while in limbo after the bat unwillingly grabbed onto his undead master's reliquary which activated upon the reemergence of the now adult Anastasia (under her alias "Anya") on Earth. therefore, by

After his return to the world of the living, Rasputin tracked down the last member of the deposed imperial Russian family, to the city of Paris in France where Anastasia now finally with the Dowager Empress Marie Feodorovna who were brought together by the growing persistence of her childhood love interest Dimitri. While a city bridge in Paris, fighting for her life and Dimitri's, Anastasia began angrily crushing the hateful Rasputin's reliquary with the heel of her shoe, Anastasia was able to destroy the false mystic's source of power and it ended in breaking his wretched curse upon Anastasia's family and unleashing summoned demon spirits upon his weakened wicked soul. 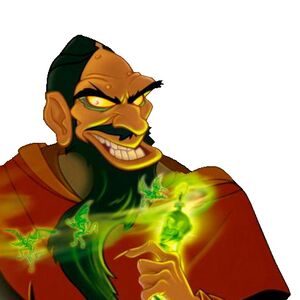 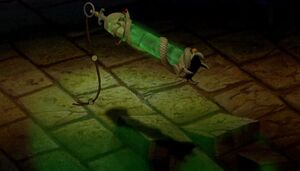 Rasputin's Reliquary falls to the ground.