Before Spyro the Dragon

To aid Red in bringing the Dragon Realms to its knees.

Red's Sceptre is a magic stave belonged to the former Dragon Elder known as Red. This object first appeared in Spyro: A Hero's Tail.

Red used the sceptre to control his minions. He also needed it to cast spells and harness his sorcerous powers. He used it to summon enemies to during his fight against Spyro.

This scepter is a tall wooden staff with crystals wedged on top of it. However, those crystals are actually Dark Gems, dangerous minerals with dark energy capable of sucking out the light and goodness of the world.

Red's Sceptre possesses a variety of magical abilities to protect himself and to attack his prey: 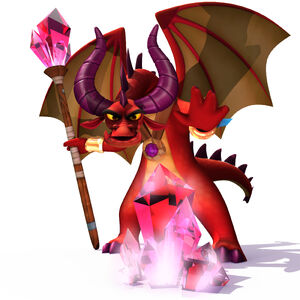 Red
Add a photo to this gallery
Retrieved from "https://evil.fandom.com/wiki/Red%27s_Sceptre?oldid=115885"
Community content is available under CC-BY-SA unless otherwise noted.