Billions of years ago.

To help the Red Lantern Corps spread rage across the universe.

The Red Lantern Power Rings are the signature weapons of the Red Lantern Corps and one of the many objects featured in the DC universe.

A Red Lantern's ring is used by the members of the Red Lantern Corps. The ring feeds on the rage of it's user and is charged by the blood of those the user kills. The Red ring replaces the user's heart, rendering it useless.

When members take the ring, they undergo a form of indoctrination, giving into the rage and hatred until it is all that they know, consumed with the need for revenge and destruction.

When the blood spoils, the wearer expels it from their mouth in a vomit of violent rage. A Red Lantern's veins stretch as they fill with the liquid fire of the red light.

Apparently only a Blue Power Ring is able to counteract the power of a Red Lantern ring if the user experiences a great enough hope to overcome their rage. 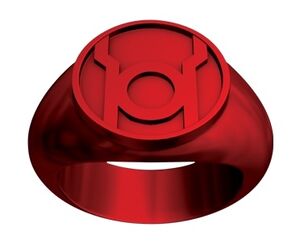 A Red Lantern Power Ring.
Add a photo to this gallery
Retrieved from "https://evil.fandom.com/wiki/Red_Lantern_Power_Rings?oldid=92076"
Community content is available under CC-BY-SA unless otherwise noted.