10.000 years prior to the events of Mighty Morphin Power Rangers Season 1

To spy on Power Rangers's movements as well as anything else for Rita Repulsa and Lord Zedd.

Unknown (presumed stored away or destroyed)

The RepulsaScope is an alien optical telescope belonged to the crafty alien witch Rita Repulsa from Mighty Morphin Power Rangers. This device is also known as DoraScope (in Japanese: ドラスコープ, DoraSukōpu) in its original Japanese version from the Super Sentai metaseries' 16th installment Kyouryu Sentai Zyuranger.

This telescope that belonged to Rita Repulsa is an optical telescope which enable her to spy on her foes on Planet's Earth from the Moon Palace.

While its design basically same with that of their regular counterparts, it should be noted that the RepulsaScope possessed a greater range, suggesting that it was created and/or enhanced by magical means for such purpose.

However, despite being an ideal spying equipment, it possessed some limitations, for it lacked additional enchantment which allow the user to see through indoors.

Following the purification of Rita Repulsa and her evil husband Lord Zedd into their human forms by Zordon's cosmic Energy Wave (also known as the Z Wave), the fate of this device remained unknown. It is implied that the RepulsaScope was either destroyed back at the now ruined Moon Palace due to the attacks by the Machine Empire or stored away by Rita following her redemption and her residual magic's reemergence into the heroic Mystic Mother. 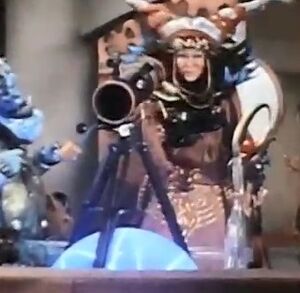 Rita Repulsa's telescope.
Add a photo to this gallery
Retrieved from "https://evil.fandom.com/wiki/RepulsaScope?oldid=81532"
Community content is available under CC-BY-SA unless otherwise noted.