To remain as the capital of the Media Dimension.

Rezopolis, also known as Rez's Nerve Center, is the bizarre capital of the Media Dimension created for Rez. It is a location and level in 2 videogames Gex and Gex: Enter the Gecko.

This city was constructed when Rez fall on scrap heap for trying to steal cable where it became the overlord of Media Dimension. It was in this world that Rez created the 4 TV portals on dome top. There were also rivers of Liquid Rez completely dangerous and in that liquid which Rez creates his monsters. Rezopolis' main core is Rez's Lair.

After his defeat at Gex's hands, Rezopolis was re-established for two years where some of Rez's more monstrosities now resided. Rezopolis is accessible for TV located in lion head statue and last secret level. Rezopolis it became an independent world after the Rez's second defeat.

In Gex, the city of Rezopolis is composed with TVs, transmitter towers, cabes, generators, silos and high-tech surface.

In Gex: Enter the Gecko, the city of Rezopolis was re-established, but this time it is very nightmarish. Flesh inside on steel structure, blades, fuel power station, TV forests, billboards on walls and wallpaper with mountains picure on background. 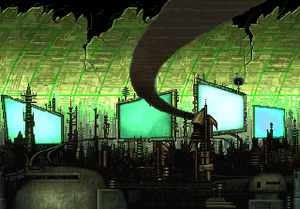 Rezopolis in Gex: Enter the Gecko.
Add a photo to this gallery

Retrieved from "https://evil.fandom.com/wiki/Rezopolis?oldid=64043"
Community content is available under CC-BY-SA unless otherwise noted.