In works of fiction, there comes a time when the villain seizes his or her opportunity and gains power, channeling it into taking control over a nation or terrorizing the protagonist(s). In other words, the villain is Rising to Power. The villain takes matters into his or her own hands does something that can warp his or her mind or change him or her into a more powerful force. Sometimes he or she can win the day when he or she obtains his or her power over others. This can also lead to evil laughter or a Villainous Breakdown. Villains who usually display this are dictators, giant monsters, masterminds, master manipulators, or evil geniuses. There are many ways the villain can rise to power:

Ruber alchemically fuses Excaliber to his hand as he soon began rising to power.

The Evil Queen drinking a potion to transform herself into a hideous Witch.

Coco LaBouche demanding the Rugrats to be locked away.

Hans betraying Anna revealing his true colors and intentions to her.

Frollo ambushing the Court of Miracles.

Kent Mansley interrogating Hogarth on the Iron Giant's whereabouts, before chloroforming him.

Ursula rising to power as she gained control over the sea.

The Goblin King's rise to power.

Dag capturing the hens and rising to power.

Jafar becoming a powerful sorcerer while seizing dominion over Agrabah.

The Dazzlings' rise to power.

Preed betraying Captain Korso and holding him, Cale, and Akkima at gunpoint. 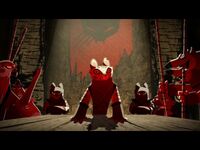 Aloyisius O'Hare preparing the chase to destroy the Truffla seed.

Queen Narissa preparing to transform herself into a giant dragon.

Shen preparing to sail on his armada.

Gaston gathering a mob to storm the Beast's castle and kill him.

Clayton revealing to Tarzan his sinister plan to cage all the apes, before locking him in the brig.

General Mandible explaining to Princess Bala his sinister plan to drown all the ants before imprisoning her.

Ramsley revealing to Jim his betrayal to Master Gracy before flinging the former out the window.

Shan Yu ready to seize power over China, before taking the Emperor hostage.

Carface before to brutally beaten Itchy and burned Charlie's Casino 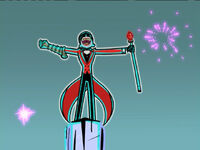 Markal with his army of 1000 Skeletons.

Mrs. Tweedy's rise to power after her husband repairs the pie machine.

Boingo revealing that he is the bandit and rises to power.

Lotso revealing his true hatred for all toys.

Bill Sykes kidnapping Jenny for ransom and rising to power.

Alameda Slim heading off to purchase Patch of Heaven.

Archibald Snatcher rising to power.
The Simpsons Movie 210.JPG
Russ Cargill announces to the citizens of Springfield that he's gonna plant a bomb in the dome.

Zoe munknapping Jeanette to force her to retrieve treasure from a small cave and revealing to Alvin and Dave that she intentionally came to the island--not crash landed--to get said treasure.

Royal Pain transforming everyone to babies, and rising to power.

Sedusa transforming into a giantess and rising to power.

Clayton heading up the treetops to kill Tarzan.

Alphonse Perrier du von Scheck revealing to Arnold and Gerald his true intentions of bulldozing their neighborhood, before burning the document declaring it a landmark.

The Fallen (Transformers Film Series) looking at the Sun Harvester
Add a photo to this gallery
Retrieved from "https://evil.fandom.com/wiki/Rising_to_Power?oldid=9068"
Community content is available under CC-BY-SA unless otherwise noted.