The Ritual of Oblivion is a mysterious and ancient, dark ceremony that is capable of destroying the very life energy and essence of it's living target (mortal or immortal) by sending away his or her soul to the Netherworld forever. It is featured in the 1988 fantasy movie Willow as well as the film's novelization Willow: A Novel, the 90-page roleplaying game sourcebook The Willow Sourcebook.

The cruel witch Queen Bavmorda, ruler of Nockmaar, prepares the Ritual of Obliteration at the Nockmaar Castle within the Daikini kingdom of Nockmaar upon the capture of the sacred child Elora Danan in order to banish her soul to the Netherworld so that she would not be able to fulfill the prophecy that would lead to Bavmorda's destruction and the end of her reign of terror.

The novice wizard Willow Ufgood, however, intervenes and makes Bavmorda believe that he has transported Elora to a realm of pure goodness where evil cannot touch her, and in her surprise, she accidentally spills the potion she created on herself instead, banishing her own spirit to the Netherworld forever. 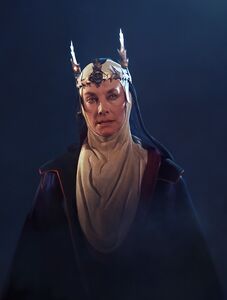 Queen Bavmorda
Add a photo to this gallery
Retrieved from "https://evil.fandom.com/wiki/Ritual_of_Obliteration?oldid=48166"
Community content is available under CC-BY-SA unless otherwise noted.