Rival Turned Evil is a villainous scenario which is one of the possible routes of an evildoer's Origin Story where in this case, the villain was originally the rival of the protagonist.

As the name implies, the villain who become evil in this way started off as rival for the hero/protagonist. The degree of their rivalry ranged from being one-sided, playful, to mutual determination to become better than another. Nevertheless, the hero and the rival had little to no serious enmity to one another.

Unfortunately, some cases of rivalry can be the beginning of an enmity where the rival went to the dark side. Reasons are vary, be it a grim/bitter revelation that negatively affected whatever friendship the hero and the rival had, fighting over a love, or certain trivial issues which escalated to catastrophic levels. By the point of the fallout between the two, the rival would release all of his/her envy and frustration towards the hero in each of their confrontations as enemies. 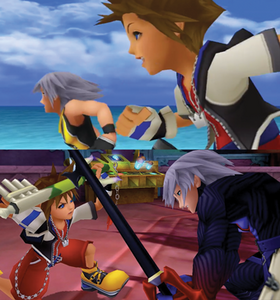 Riku and his rival Sora
Add a photo to this gallery

Retrieved from "https://evil.fandom.com/wiki/Rival_Turned_Evil?oldid=113457"
Community content is available under CC-BY-SA unless otherwise noted.