Robophobia is a fictional form of oppression found in the Futurama universe, specifically in the Futurama media and is a major part of the daily struggles of both heroes and villains in the setting: it is a parallel to a multitude of real-world oprressions and although not all characters who display this are evil-minded many of the Robophobics (both humans and robots) play on the fear and hatred caused by Robophobia to justify horrific acts of threats against robosexuals. 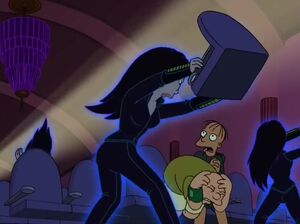 Robophobia, the fear of robots and other cybernetic organisms.
Add a photo to this gallery
Retrieved from "https://evil.fandom.com/wiki/Robophobia?oldid=63644"
Community content is available under CC-BY-SA unless otherwise noted.