The Evil Wiki
Register
Don't have an account?
Sign In
Advertisement
in: Oppression, Villainous Tools and Other Items, Villainous Events,
and 6 more

Roboticization is the process of organic beings with free will into mindless cybernetic organisms and a core aspect of many Sonic the Hedgehog games, dating back to the earliest incarnation of the series and continuing to the modern age - it is also somewhat of a calling card for all versions of Dr. Ivo "Eggman" Robotnik and even his machine known as the Roboticizer.

In the original games, Dr. Eggman used this technique to transform animals into machines called "Badniks" by which to pollute and ruin Sonic's world as well as to increase and expand his technocratic regime and their numbers, the animals could be easily set free once the machines were destroyed and they came in many different forms, he also had a very large containing device (usually found at the end of a boss battle) that held many animals, presumably waiting for Roboticization.

It was not until SatAM however that Roboticization went from a way to explain robots in Sonic's world to an extremely dark and villainous topic - thanks to one of the most evil versions of Robotnik to have been devised, instead of simply trapping small animals in machine this Robotnik converted living, sentient animals (humanoids) into machines not unlike Mecha Sonic, subservient to his will.

The process was considered irreversable and became a major plot device for the SaTaM series. Of course, outside the SaTaM series, the process would continually return in Sonic games (though not as dark, usually going back to simply trapping animals inside machines which Sonic can rescue) - although Archie Comics would continue the darker, irreversable Roboticization that came to be associated with the more malevolent incarnations of Eggman.

In later adaptations of the Sonic media, the concept was toned down or removed from games as Eggman became more comedic, but the process has made a come-back - being one of the driving portions of Sonic Lost Worlds. 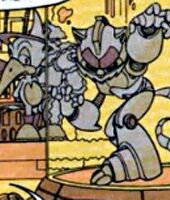 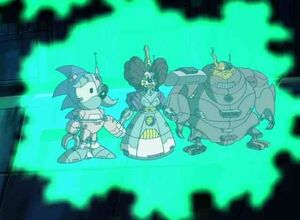