To serve as the primary Arachnos headquarters and a haven for super-villains.

The Rogue Isles are a fictitious archipelago nation in the videogame City of Heroes. It is the base of operations for the terrorist organization Arachnos and the designated area of explorations and missions for villainous characters.

The Isles are stated to be somewhere North-West of Bermuda and a few dozen miles off the the US cost. The island chain is officially referred to as the Etoile Islands but due to the lax set of laws governing them became a pirate haven during the 17th century and cementing the more familiar nickname "Rogue Isles". Since it's founding days the Rogue Isles has become a haven for money laundering, escaped convicts, smugglers and black-marketeers. President Marchand's cabinet of Port Oakes was one of the closest things to an organized government for the Isles but Marchand was disposed by Arachnos. After Lord Recluse assassinated Arachnos's former leader, Weaver-One, and ascended as leader he choose the Rogue Isles as the site of his rising empire of super-villainy.

With Arachnos in charge of the Isles, a new government was established, many Isles were given their own rulers loyal to Arachnos, the most well-known of such is the mad-scientist Doctor Aeon, governor of Cap Au Diable. Other ruling parties pledging fealty to Arachnos include the Marcone crime family, Kirk Cage, Johnny Sonata and Marshal Brass. Some Isles only have the Arachnos Arbiters to keep and oversee Arachnos laws but have no actual government, instead trusting said isles to whatever super-villains are ambitious enough to seize power for themselves. Because Lord Recluse is almost religiously a Social-Darwinist the Isles enjoy a state of organized anarchy with base laws like killing non-powered civilians and racial discrimination being outlawed but broader laws like theft, gang wars, drug use, smuggling, weapons development and murder among super-villains all not only being perfectly legal but expected, provided said criminals are strong or smart enough to successfully commit said acts. Religion is illegal in the Rogue Isles as Lord Recluse considers acknowledgement of any being higher than himself as treason.

The Arbiters that enforce Arachnos's laws are completely loyal to Lord Recluse and protected by his clout. While most Arbiters are well trained Arachnos veterans they are sworn to be unbiased and help any super-villain with potential that seeks their aid, even villains that are known enemies of Arachnos. Arbiters may appear to be benign but their iron-clad loyalty to the notion of Survival of the Fittest and loyalty to Lord Recluse above their own lives does yield them some protection; Arbiters are considered the living will of Lord Recluse and so attacking one will prompt all local Arachnos forces to drop what they're doing for the sole purpose of to hunting down and killing anyone who dares attack the Arbiters. Most super-villains and normal citizens support Arachnos because of the protection it offers against far more sinister and uncaring potential villains like Nemesis, the Circle of Thorns or the 5th Column, who would surely seize power if Arachnos was not around. Under Arachnos' rule the Etoile Islands have been recognized by the United Nations as their own country. Arachnos keeps the U.N.'s possible humanitarian concerns in-line with bribes, hypnotic suggestion devices and Lord Recluse's silver tongue. As an officially recognized nation of the U.N. the Rogue Isles is legally protected from raids by Lord Recluse's arch-enemy, the hero, Statesman and his fellow heroes of the Freedom Phalanx. Only hard-core evidence or dire threats to the world can give Statesman the leeway to personally set foot on the Rogue Isles, making the Isles a haven for super-villains.

Basic Laws of the Rogue Isles

Since Arachnos runs the Rogue Isles and the organization has a hard-core Survival of the Fittest policy, that extends to their own people, any further rules are purely advisory and any villain that gets away with things like theft or murdering an Arachnos officer is acceptable if they do it well enough to get away with it. One is free to say steal a mad-scientist's dooms-day-device, however said mad scientist is permitted to shoot any intruders on sight and neither will suffer consequences from the authorities even if one of the parties in question was part of Arachnos. You CAN legally get away with banging up someone's car in the parking lot, but they can hire assassins to come for you in the middle of the night and kill you. So the following policies are more laissez-faire terms than actual laws.

A mile high wall around Spider City mounted with canons and Arachnos ballistas keeps most threats out and if any such threats do appear a well armed, city sized platoon is dispatched to annihilate the nuisance. The reenforced underground bunkers of the city not only provided shielded locations for various research and security labs but make tunneling under the city an impossibility. Grandville's television network has achieved sentience (possibly as a side-effect of the Tangle) and invisibly guards Grandville against interdenominational threats, which it can detect through the unique overlapping frequency it's thoughts exist on. Although the TV does not serve Lord Recluse it does consider the residences of Grandville it's viewers and thus protects them against any outside threats, assuring that even teleportation is not an effective method to enter Grandville. High up above the Tangle in Arachons' main tower in Spider City sits Lord Recluse and his Patrons:

From the nigh-impervious fortress at the center of Grandville Lord Recluse and his Patrons unleash various projects and schemes to defeat the heroes of Paragon City once and for all, seconded only to their lofty goals of complete world domination. 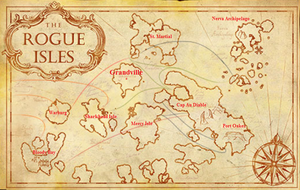 A map of the Rogue Isles.
Add a photo to this gallery
Retrieved from "https://evil.fandom.com/wiki/Rogue_Isles?oldid=81602"
Community content is available under CC-BY-SA unless otherwise noted.