The Evil Wiki
Register
Don't have an account?
Sign In
Advertisement
in: Mature, Villainous Tools and Other Items, Possessed Objects,
and 3 more

Unknown numbers of victims, being 95% of the subjects that consumed a fourth or more canies

SCP-1079 is the designation given to a number of sweets, with its pacakse brightly labelled as "Dr. Wondertainment's Bubblebath Bonbons!®". Each crate of this kind of candies contains 64 packages of them. It was initially discovered in 1990, when several instances of SCP-1079 had been delivered into several supermarkets. As of 2005, any attempt to follow the trace of deliveries was proved to be fruitless.

Human subjects that consumed SCP-1079 will endure tingling feelings at first. Tens to fifteens seconds after consumption, the subject's blood was turned into pink, bubblegum-scented foam and began to secret from the subject's pores on their abdomen, arms and back. Initially, it does not pose a health risk to the subject.

However, after consuming four or more candies in one sitting, the volume of secreted blood will be increased exponentially. 95% of the subjects that consumed at least four candies in a single sitting had died of exsanguination. It was also discovered that this effect scales with the consumer's body mass.

All instances of SCP-1079 are currently stored within Site-19, and watchlist databases are to be updated with its information, in order to intercept any future shipments of more products.

SCP-1079 appeared as one of the objects in Unity's edition of SCP - Containment Breach, within Secure Storage 2 of Light Containment Zone, alongside SCP-207 and SCP-178. 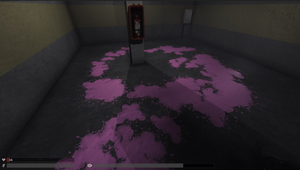 The pink blood that appears should the player consume SCP-1079. 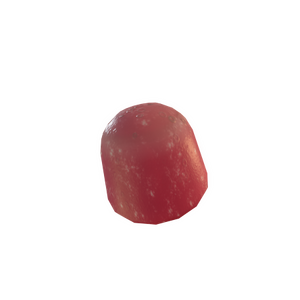 SCP-1079 as it appears in the inventory. 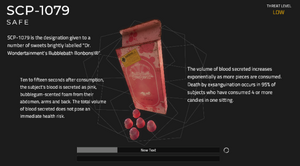 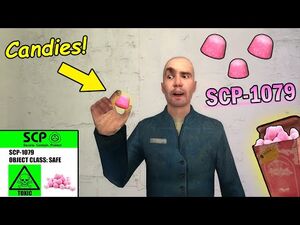