SCP-122, also known as "No More Monsters", is a Keter-class object contained within SCP Foundation's containment. As strange it may sound, SCP-122 is a child's nightlight, designed to look like a star. This product is unregistered, has no brand name written anywhere on the structure. So, it is safe to presume this nightlight is all but normal in its kind.

Reports indicates that when it is in its unpowered state, the nightlight will affect anyone in a 500 meters radius of its location. When anyone enters the radius, they will slip into a REM sleep and will be sent into a comatose state until the nightlight had recharged itself.

While comatose, subjects will claim that they have seen humanoid figures that are formed with a dark, translucent mass of shadows from somewhere around the light. These figures are hereafter known as instances of SCP-122-1.

Instances of SCP-122-1 exhibit signs of sapience and sentience, with physical abilities roughly equivalent to the affected subjects. They will attempt to locate as many human subjects as possible, and expose them to SCP-122's effect. As more subjects are affected by SCP-122, its radius of effect will expand, with the maximum range seen in testing being over 2.7 kilometers. The SCP-122-1 instances will attempt to gather all sleep aids within the area of effect and apply them to the subjects. These objects have included:

When in a powered state, SCP-122 will affect the sleep patterns of all subjects within its radius. If a subject awakens from a state of REM sleep while within SCP-122's radius, they will display signs of insomnia, and will complain of unusual, psychological tormenting dreams. These dreams have been found to cause minor psychological disturbances, and all personnel should be given weekly psychological evaluations.

SCP-122 was discovered within the Linnell Children’s Hospital on ██/██/███, after several reports of SCP-122-1 manifestations reached locally embedded agents. When the area was investigated, it was found that all subjects within the building had been affected by SCP-122. Recovered documents indicate that a patient brought SCP-122 when being admitted. However, no record of the patient's identity has been found. Agents secured SCP-122 with a members of site personnel and ██ casualties. Following re-containment operations, SCP-122's containment procedures were put under review. During this review, security footage of several maintenance personnel tampering with SCP-122's chamber-lock was discovered. When questioned, the subjects claimed that they had done so under duress, saying that a "canary" was not allowing them to sleep until they released SCP-122. Affected subjects were given Class-A amnestics, and containment procedures were revised. 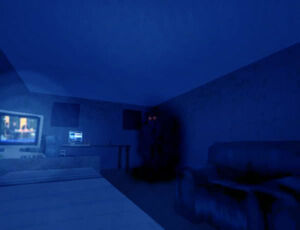 Instance of SCP-122-1.
Add a photo to this gallery

Retrieved from "https://evil.fandom.com/wiki/SCP-122?oldid=107105"
Community content is available under CC-BY-SA unless otherwise noted.