The Evil Wiki
Register
Don't have an account?
Sign In
Advertisement
in: Mature, Dark Forms, Villainous Tools and Other Items,
and 3 more

To sound the demise of any who hear it and ended by being stalked by SCP-513-1 via its summoning sound.

SCP-513 (also known as the Cowbell) is a Euclid-class object in SCP Foundation's containment. SCP-513 is simple, rusty bell. The ringing of SCP-513 causes all who hear it to be stalked by a humanoid abomination known as SCP-513-1.

Physically, SCP-513 is an unremarkable, rusty cowbell. No marks or engravings are visible on its surface due to the large amount of corrosion. Attempts to remove the rust chemically or mechanically have had no success.

Any noise produced by SCP-513 immediately induces strong anxiety in all sentient beings who hear it, regardless of their previous mental status. Exposure victims report feelings of being watched by an unseen entity and present elevated heart rates and blood pressure.

Roughly one hour after exposure to SCP-513, victims will begin to catch glimpses of SCP-513-1 when opening doors, walking past mirrors, turning their heads, or performing any other actions that result in a sudden change in visual perception. Upon being sighted, SCP-513-1 reportedly turns away and runs out of view before disappearing without a trace. Questioning of bystanders indicates that SCP-513-1 is invisible to those who have not been exposed to SCP-513.

Sightings of SCP-513-1 reoccur every 14 to 237 minutes. This "stalking" behavior inevitably causes extreme sleep deprivation, as victims are frequently disturbed by SCP-513-1’s presence in their quarters. Victims able to fall asleep before SCP-513-1's appearance report being physically assaulted by it. Upon the victim's awakening, SCP-513-1 flees as usual. This sleep deprivation, along with the mental stress caused by SCP-513-1's behavior, invariably induces paranoia, aggression, vigilance, and depression. All test cases but one has ended with the test subject’s suicide.

Descriptions of SCP-513-1's appearance are largely unreliable. Test subjects are unable to provide complete accounts of sightings due to their exhaustion, degraded mental health, and disruptive hypervigilance. However, all interrogations thus far indicate that SCP-513-1 is a tall, emaciated humanoid with abnormally large hands.

SCP-513 & SCP-513-1 both appeared in SCP - Containment Breach. Although ringing the bell will summon SCP-513-1, the player won't be driven to suicide. 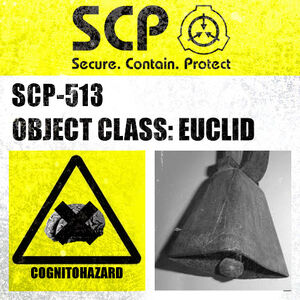 The label outside of SCP-513's containment chamber. 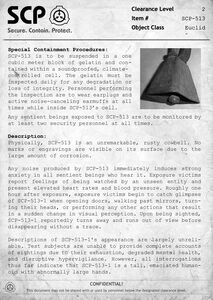 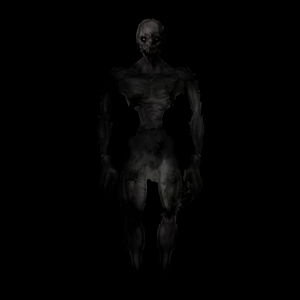 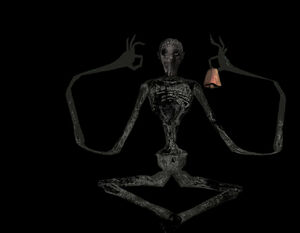 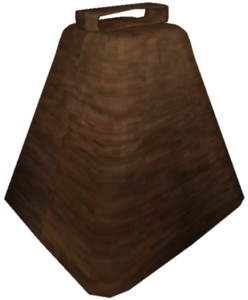 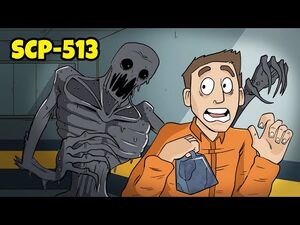