To be the home and domain of the Red Queen and all who followed her, to be the symbol of unjust execution and cruelty to all who opposed the Red Queen's dominion.

Salazen Grum is a harsh, royal port city in the oppressed magic realm of Underland. It is home to Iracebeth (better known as the Red Queen) and her royal subjects and her army of armored card solders, and her palace called Crims is found within this place of oppression. It is a location in the Tim Burton's 2010 Disney movie Alice in Wonderland based on author Lewis Carroll's fantasy novels, Alice's Adventures in Wonderland and Through the Looking-Glass, and inspired by Walt Disney's 1951 animated film of the same name. It made a reappearance in the 2016 Disney film sequel Alice Through the Looking Glass.

This dreaded kingdom is located beyond the Red Desert, which is home to all of the Underland monsters. Crims, the royal castle of Salazen Grum within the Red Desert, and it is the most dangerous place in all of Underland. In order to get to Crims, one must first need to cross the Crimson Sea, which is home to many malicious sea dwellers. Many people have died trying to cross both the sea and the desert. There exists the city's main Square with a stone heart-shaped sculpture where all citizens of Salazen Grum, as well as the Red Queen andmm members of her royal court,mm gathered to witness the public executions on this "chopping block".

The Red Queen rules all of Underland from this land with an iron fist since Horunvendush Day, while seeking to destroy her sister, the White Queen and her followers. She enjoys her lavish lifestyle and her love of croquet games there, until the arrival of Alice Kingsley, the "right Alice", to Underland.

Chessur the Cheshire Cat (also known as "Chess"), fooled the Red Queen and everyone at the main square of Salazen Grum by taking disguise of Tarrant Hightopp (the Mad Hatter) to foil his execution and helped free Mallymkun the Dormouse (also known as "Mally"), Nivens McTwisp (the White Rabbit), and the Tweedle Boys. Tarrant made of Queen Iracebeth and her clique of aristocats with phony prosthetics for body part whom she now angrily sees as frauds and mockery of her kingdom and immediately the Salazen Grum citizenry too rise up.

Alice Through the Looking Glass

The city including the castle itself is made out of hearts and shares the same color scheme as the Queen of Hearts card. There are a few problems with the animated geography of the castle's location where as, in one scene there is a moat of heads surrounding the castle with the minor draw bridge connecting them both, and in another it is just a rock and dirt path.

The Red Desert is a vast desert that is the location of the city of Salazen Grum. It is mostly consisting of red or green ground and bares trees within. It contains many creatures inside and it is heavily guarded by the red card soldiers.

The Crimson Sea is a body of blood-red water within Underland that is home to many vicious and nasty sea dwelling creatures. It is connected to a moat surrounding the city and the main castle, and the moat itself is filled with hundreds, if not thousands, of decapitated heads of Queen Iracebeth's victims including the disposed Red King who was punished by his angry wife for his crime of allying himself with the White Queen for her fear of him leaving her.

The main royal chamber of the Crims castle where all of the Red Queen's subjects come to greet her. The throneroom itself is a long corridor with large red pillars reaching up to the ceiling. The throne is a small red heart-shaped gold chair pushed back into a small indent with curtains on either side and a large stained glass window designed with hearts. There are stained windows on the sides of the room giving an illusion of a more spacious feel. The back wall of the entrance has a mural of the Red Queen on the Jabberwocky fighting off a gryphon. The middle section of the floor is checkerboard pattern covered by a red carpet leading up to the heart shaped stairs where the throne is placed. There are two doors on either side of the back wall.

A royal bedchamber that is dimly lit with a huge balcony and presumably where the Red Queen sleeps.

The inhabitants of Crims are the Red Queen, Knave of Hearts, the Bandersnatch and the Jubjub Bird. There were also the Red Queen's knights who were design like playing cards. The Red Queen's people have big body parts like their chin, nose, ears, belly, etc. which are revealed by the Mad Hatter that they were using prosthetics and pillows. 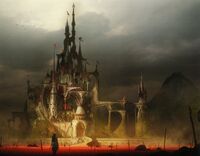 The Red Desert as seen in the Nintendo DS version of Alice in Wonderland.
Add a photo to this gallery

The Crimson Sea as seen in the Nintendo DS version of Alice in Wonderland.
Add a photo to this gallery 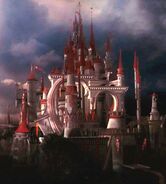 Queen Iracebeth's Crims castle as seen in the PC version of Alice in Wonderland. 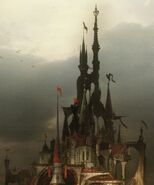 Retrieved from "https://evil.fandom.com/wiki/Salazen_Grum?oldid=59229"
Community content is available under CC-BY-SA unless otherwise noted.