The Seal of Nerissa

To absorb all the powers of the Guardians and the Hearts of Meridian and Zamballa.

To unleash Nerissa Crossnic's magical powers against her enemies.
To subjugate each world in the universe to Nerissa's own vision of perfection.

The Seal of Nerissa is a magical sceptre created and wielded by the sorceress Nerissa in the animated series W.I.T.C.H. and the comicbook series of the same name.

Nerissa then absorbs the original Guardians into the Seal after they snapped out of her control. This allowed the Seal to have all the Guardians powers. Phobos managed to gain the Seal away from Nerissa, and renames it the "Sceptre of Phobos". After retaking the kingdom of Meridian, Phobos sets his sights on Kandrakar, and was on the verge of taking it when he is betrayed by Lord Cedric, who swallows him whole, thus gaining his powers for his own.

After the arrogant Lord Cedric's defeat, the weakened Prince Phobos is brought back up and the Seal of Nerissa is also broken, separating into a tear-drop jewel and the Heart of Zamballa. C.H.Y.K.N. and Elyon manage to escape, however, Nerissa cannot since she chose power over harmony when a illusionary false reality where she immediately became the undisputed mistress of the orderly universe upon her false escape, which is why she is permanently inside the Heart of Meridian for all time.

It has been shown with the power of the Heart of Meridian, Heart of Zamballa and the Guardians Powers, that its holder has the powers of: 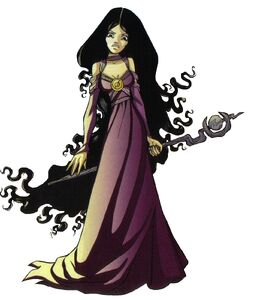 Nerissa Crossnic with her namesake magic staff, the Seal of Nerissa.
Add a photo to this gallery
Retrieved from "https://evil.fandom.com/wiki/Seal_of_Nerissa?oldid=116065"
Community content is available under CC-BY-SA unless otherwise noted.