The Shadow Realm can only be accessed when a person holding a magical item called the Shadowstone steps on a Shadow Teleporter Pad in order to enter that world. Many horrible and strange creatures resides there.

The Shadow Realm made its appearance shortly after the game's introduction, appearing as a wave of crackling, dark magic that pulled everyone in the Dragon Realms, Avalar, and the Forgotten Worlds into the dark, alternate dimension. Spyro is guided to the safety of the Dragon Dojo by Tomas, who then tasks Spyro to rescue the other Dragon Elders from the Shadow Realm. The Elder, Sensei, teaches Spyro how to battle the shadowy creatures in the Shadow Realm that can only be hurt by the art of Dragon Kata. 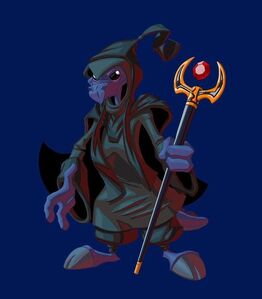 The Sorcerer
Add a photo to this gallery
Retrieved from "https://evil.fandom.com/wiki/Shadow_Realm_(Spyro)?oldid=48225"
Community content is available under CC-BY-SA unless otherwise noted.