Shinnok's Spire, sometimes known as the Spire of Shinnok is a towering ancient temple that is both home and sanctuary of Lord Shinnok in the Netherrealm, and it is one of the arenas in Mortal Kombat: Armageddon. The fallen Elder God himself reigned supreme over the entire dark realm from within the chambers of his Spire for countless millenia.

This place is too revered as a holy place by the diabolical cult known as the Brotherhood of Shadow, disciples of Shinnok.

The Spire contained numerous floors which required special portals that allowed entry to the next level. A number of Wraiths and Demons were present within this arcane structure. was where Shinnok's Throne Room was present.

Walls of spikes among many traps and dangers within the Spire are present where unwary "guests" and victims are capable of being killed on with canals of blood being present from those who have suffered and died.

Located at the very top of the Spire is Shinnok's Throne Room, the final main chamber of the Spire, This monastic arena-like throne room is where the diabolical fallen Elder God sits upon the Throne of Shinnok, which also perceived only as his holy alter by the Brotherhood of Shadow themselves, while he presides over the accursed Netherrealm as it's supreme master.

It is here that Shinnok regained his throne from an insurgence of demons and other warriors, thus restoring what little semblance of authority he had left with the aid of the Edenian demigod Taven before transporting him to his dragon guardian Orin's cave in Earthrealm. But it was all an elaborate test and the entities and monsters were but illusions conjured by Shinnok's power. It is also where after Taven's departure from the Netherrealm, his brother Daegon was seen discussing with Shinnok about his plans about the Battle of Armageddon that will happen in Taven's homeworld of Edenia and Daegon himself is chosen as the vital catalyst to Shinnok's escape from the Netherrealm via his victory in the Great Battle.

Shinnok's Spire presents Taven with various challenges he has to surpass in order to step through a swirling blue portal that acts as some kind of elevator and advance to the next level: 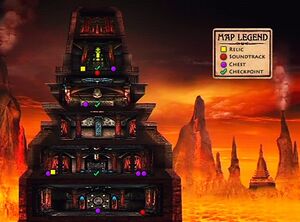 A view of Shinnok's Spire in the Netherrealm.

A view of Lord Shinnok's Spire.

A map of Shinnok's Spire. 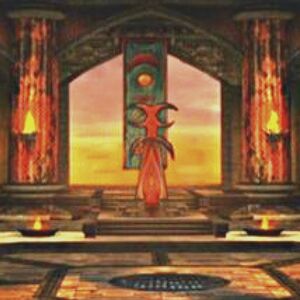 the Throne of Shinnok 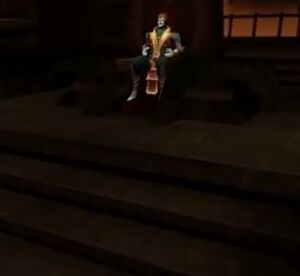 Lord Shinnok sitting on his Throne.

A view of Shinnok's Throne.
Add a photo to this gallery

Retrieved from "https://evil.fandom.com/wiki/Shinnok%27s_Spire?oldid=84590"
Community content is available under CC-BY-SA unless otherwise noted.