The Siege of Doma is a villainous event occurred in Final Fantasy VI. It is a part of the Gestahlian Empire's third campaign of world conquest, and a response to the castle haven Doma's support for the Returners.

During the battle, the Doma army is about to lose. In desperation, Cyan Garamonde suggests attacking the enemy's commander in hopes of relieving pressure from the siege. Cyan alone engages the enemy and kills them in battle and the Imperial forces retreat. Cyan returns inside to help plan the next defense. In the Imperial Camp, Sabin and Shadow infiltrate the enemy stronghold. Inflicting minor casualties on the Empire's forces, they eavesdrop on the Imperials' plans.

Then the Imperials plans to strike back. However, the most infamous act after that is not committed by Imperial armies, but by the magical madman Kefka Palazzo.

After being summoned by Emperor Gestahl, General Leo departs for the Imperial Capital and relinquishes the command to Kefka, urging him not to act inhumanely. All Leo wants is the least causalities as possible. However, Kefka ignores Leo's request and orders the poisoning of the river surrounding the castle to force an easy victory, even if the soldiers won't. Shortly before dumping the poison, Kefka, cackling to himself, muses that there is nothing better than "music composed of hundreds of voices screaming in unison". The poison kills most of the population of the Doma Castle, including Cyan's wife and child, and of many Imperial soldiers detained as prisoners.

The outcome, which sees the almost complete extermination of Doma's inhabitants, marks the height of the Gestahlian Empire's power. In rage for his family's death, Cyan attacks the Imperial Camp. He meets Sabin and Shadow, who assist him in escaping via commandeering three Magitek Armors and make their way south of Doma into the Phantom Forest. At the time, Kefka's poisoning of Doma was the most horrific war crime he'd yet committed. Celes also heard of Kefka's plan to poison Doma, and it was implied that she attempted to speak out against it, resulting in her imprisonment, as well as her rescue by Locke Cole and her eventual defection to the Returners.

Later, during the Empire's formal surrender, if the party asks the right questions when addressing the Emperor he will agree to retreat the Imperial troops from the Doma Castle. The Emperor also states he has assigned troops to clean the poison from the area. 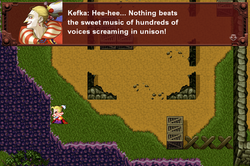 Add a photo to this gallery
Retrieved from "https://evil.fandom.com/wiki/Siege_of_Doma?oldid=26602"
Community content is available under CC-BY-SA unless otherwise noted.