The Order of Salvation

To erase all the souls and memories of the dead in order for survivors and the Order of Salvation to enter a clean slate within Bhunivelze's new world.

The Soulsong (in Japanese: ソルソング, Sorusongu), referred to as the "Ritual" (in Japanese: 儀式 Gishiki) or the "Ceremony" (in Japanese: 式, Shiki) in the Japanese version, is an important and "miraculous" ceremony in the religion of the powerful spiritual cult known as the Order of Salvation which is needed to be performed on the final day of Nova Chrysalia's existence by Vanille chosen as "The Savior" by their god Bhunivelze, and it is a key plot element in Lightning Returns: Final Fantasy XIII.

The ritual is proposed by the god Bhunivelze to his devotees, the Order of Salvation, to grant them eternal bliss in the new world. The ritual destroys the souls of the dead so the living would forget their existence, enabling them to start over with a "clean slate", freed of their burdens and weaknesses. The Order, believing that being chosen for rebirth in the new world is an honor, come to believe fully in performing the Soulsong.

2 things are needed for the performance of the Soulsong: a sacrificial 'saint', who can hear the voices of the dead and call out to them, and the Holy Clavis, a powerful artifact forged by the gods for the express purpose of destroying the dead. The Order has dubbed Vanille as the saint, having gained the power to hear the dead, and the clavis is hidden in the ruins of the Dead Dunes.

Vanille believes the dead seek oblivion to be saved from their suffering.

13 years before Lightning awakens from her crystal stasis, Vanille and Fang awaken from theirs in the city of Luxerion. They are found by Lumina and taken in by the Order, housed within the Luxerion Cathedral. Upon discovering Vanille's new power, the Order becomes interested in her and places her under their constant protection as their saint, keeping her safe from both the dangers of the outside world and their heretical cult known as the Children of Etro. When Fang learns the truth behind the Soulsong, she leaves for the Dead Dunes and forms the bandit gang Monoculus to search for the clavis.

Learning of Vanille's holy status, Lightning reunites with her in the cathedral, where Vanille shows her a large concentration of souls in God's Sanctum. Lumina tells Lightning about the Soulsong being the Order's way of enabling Vanille to call the souls to her and save them from their suffering in the Chaos by offering them oblivion. Though Lightning doubts Vanille could handle the millions of souls, Vanille says she has no other choice, and Lumina says that if the concentration of souls ever escaped, it would not only destroy the world but the future as well.

In the Dead Dunes, Lightning reunites with Fang in search of the clavis. Upon finding it, Fang reveals her intentions of destroying the clavis to save Vanille. Lumina leads the Order's Secutors to the ruins and they claim the clavis. Fang decides to go to Luxerion when the ritual is to be performed and Lightning considers stopping it herself. At the end of the 11h day, Lightning is told the truth about the Soulsong by the dead, who use Cid Raines as their medium. He tells her that Vanille has the power to save them all and help them be reborn.

Fang helps Vanille guide the souls of the dead.

On the final day, Lightning heads to the cathedral to stop the ritual. Aided by Noel and Fang, she makes her way to God's Sanctum as Vanille begins the Soulsong and convinces Vanille to listen to the dead. Vanille realizes the dead do not seek oblivion but carry on the hope of being reborn, and she chooses to stop the ritual and free the dead. Angered by Vanille defying Bhunivelze's will, the Order's High Priestess uses a blast of energy from the clavis to strike Vanille down, symbolically stripping her of her sainthood and casting her out of God's favor. As the clavis drains Vanille's life, it shines with a radiant light powerful enough to destroy the souls but Snow arrives and uses Fang's spear to destroy the clavis, ending the ritual and killing the High Priestess along with her faithful followers. After which, Fang and Vanille work together to guide the souls of the dead into the Ark so they can be reborn in the new world.

"The Soulsong" is the third track on the fourth disc of the Lightning Returns: Final Fantasy XIII: Original Soundtrack, and plays during the ritual. 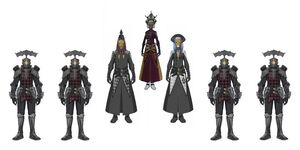 The Order of Salvation 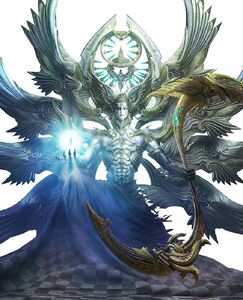 Bhunivelze
Add a photo to this gallery

Retrieved from "https://evil.fandom.com/wiki/Soulsong?oldid=59299"
Community content is available under CC-BY-SA unless otherwise noted.