world-wide (due to false vaccines)

causes the destruction of a victim's immune system

To wipe out a large portion of humanity and ensure only those with the cure will survive as a "New World Order".

The Spartan Virus is the central villainous plot of the revival era X-Files and the climax of the Cigarette-Smoking Man's scheme to wipe out 90 percent of the human population so as to enforce his own elite government and (supposedly) stop the destructive effects humanity was having on Earth itself, these same effects caused the Colonists to take less interest in humanity and as such allowed the CSM to take over as the overall main antagonist of the entire franchise.

The Spartan Virus is engineered to shutdown the human immune system and was delivered via smallpox vaccines as early as 2011, though by 2018 the conspiracy rapidly heated up as CSM began to pursue William, a half-alien hybrid who would aid in creating more alien hybrids, a  necessary step for repopulation after the Spartan Virus wiped out most of humanity, since alien DNA is immune to it.

One of the Spartan Virus' most famous victims would be Agent Fox Mulder, following a long tradition in the show of Mulder experiencing such hardships (such as losing his sister to the Colonists, being nearly burnt alive and also abducted himself).

While it is not a sentient entity the Spartan Virus can be considered the "updated" version of the alien Purity virus - which was one of the main antagonists of the original X-Files (yet was suspiciously inactive for most of the 2018 revival). 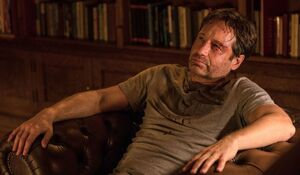 Mulder, infected with the Spartan Virus.
Add a photo to this gallery
Retrieved from "https://evil.fandom.com/wiki/Spartan_Virus?oldid=61816"
Community content is available under CC-BY-SA unless otherwise noted.