To aid Dr. Loveless and the Loveless Alliance take over the United States of America.

The Spider Tank is a giant spider-shaped war-machine designed by the evil Doctor Arliss Loveless and an object in the 1999 American steampunk western action comedy movie Wild Wild West based on the 1960s American old west TV series The Wild Wild West. It is the most powerful weapon used by him.

The Spider Tank is the most destructive weapon created by Dr. Loveless in the year 1869 A.D. It has a steampunk appearance of a giant tarantula, the insect animal that is the iconic symbol of the Loveless Alliance was based on since Doctor Loveless has a particular fondness for webs and spiders. The machine has 8 metal long legs with big gears on each one. The legs also has metal wires stretched out on each of them. It also has two nitroglycerin cannons at the bottom. The control panel is at the front and has a steam hole at the top.

While Dr. Loveless was still a member of the American Confederate Army during the American Civil War, he planned to take over the United States. A terrible accident caused him to lose the lower half of his body. He found and built the Loveless Alliance, an organization of foreign Caucasian ministers and slave owners who plan to overthrow the United States government.

After he built his "city"-like lair in Spider Canyon within the deserts of Utah, he created the Spider Tank as his ultimate weapon and planned to use it in his conquest.

It is first seen emerging from Spider Canyon operated by Dr. Loveless and his mistresses to West and Gordon's amazement. At first the spider seemed trapped but Loveless used the nitroglycerin cannon to decimate the desert mountains and proceeded to make his way towards the railroad inauguration ceremony where President Ulysses S. Grant was set to complete the Transcontinental Railroad. When President Grant tried to hammer the screw in, it kept jumping out due to the spiders footsteps, it was then that the president knew what was going on. As the spider began its approach, the citizens and soldiers were frightened by its mere sight but President Grant stood his ground as the spider stopped and lowered its head for Loveless to talk to him. Loveless demands that the United States surrender to the Loveless Alliance to the president's confusion, in an attempt to make him surrender Loveless destroys the president's train, then Gordon arrives on the scene impersonating the president while West tries to sneak on board the spider. In an attempt to save the president Gordon orders him taken away but the soldiers were all running away then Gordon ordered the president dismissed but Loveless uses the net to catch them both. When West reached the top, Munitia caught him and shot him in the chest seemingly killing him, but he survived thanks to Gordon's bulletproof vest.

After the incident in Spider Canyon, Loveless and his mistresses escape on board the spider with the president and made their way to a desert town where Loveless demands once again that the president sign the surrender treaty which he refuses. In response Loveless decimates the town and leaves it ruins. After this West and Gordon chase the spider on Gordon's flying machine, they drop a bomb on the spiders neck, but it did little damage. Afterwards West and Gordon are shot down by Amazonia, but they maneuver the flying machine to crash into the spider's cockpit sending Munitia falling to her death to Loveless' shock. West and Gordon try to rescue the president, but are captured by Amazonia and Miss Lippenrieder and taken to the cockpit where Loveless sends West through a trapped door to get "whooped" by the spider's crew but West defeats the crew forcing Loveless to deal with West himself. Equipped with hydraulic mechanical legs, Loveless angrily pins West to the floor and stomps on him until Gordon uses a peashooter to incapacitate the walking apparatus, rendering Loveless' mechanical legs useless. After Grant and Gordon finish off Amazonia and Miss Lippenrieder, they realize that the spider is on autopilot and heading for a cliff, Gordon tries to pilot the spider but ends up firing the nitroglycerin cannon.

Meanwhile, in the engine room, MN Doctor Loveless drags himself back to his wheelchair and loses his temper as he attempts to shoot West with a concealed gun, but he hits the spider's control lines by accident, locking it up just before it could plunge into the cliff. This sends West and Loveless almost over the edge, with the wheelchair getting caught in the railing. Hanging on for dear life, Loveless ponders on whether he should pull the chair's lever or not, knowing that doing so will only send himself and West falling to their deaths; even taunting West that he doesn't have the guts of making such a hard decision. However, this proved to be Loveless' downfall as it provoked an angry West to pull the lever himself before grabbing a chain outside the engine room to save himself, sending Loveless to fall screaming down the cliff to his death. With Loveless dead and his organization dissolved, West and Gordon takeover and commandeer the spider, it is last seen walking in the sunset to West and Gordon's next mission. 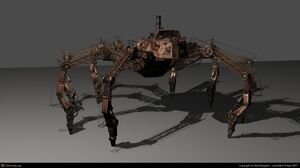 Retrieved from "https://evil.fandom.com/wiki/Spider_Tank_(Wild_Wild_West)?oldid=116444"
Community content is available under CC-BY-SA unless otherwise noted.