My Little Pony The Movie

Before My Little Pony The Movie

The Staff of Sacanus is a magical staff used by the Storm King and is featured in the 2017 feature-length animated theatrical film My Little Pony The Movie.

The staff only appears in the movie. The Storm King wanted to steal the alicorn magic to create the most powerful storms ever. Tempest Shadow tells him it will channel the four princesses magic making it more powerful. Therefore the Storm King tasks Tempest delivering Twilight Sparkle within 3 days in exchange for restoring her broken horn. Eventually Tempest captures Twilight and brings her to Canterlot.

Under his control, the staff gave the Storm King nearly "infinite" control over weather, allowing him to effortlessly creating massive storms. He also realizes he respectively has control over the sun and moon and then uses it to create a powerful cyclone.

The Storm King arrives and uses the Staff to steal the magic of all four princesses of Equestria.

Twilight managed to wrestle the staff from his hands in order to save Equestria from his clutches and restore the other princesses of Equestria.

In an alternate universe, Princess Eris received the staff as well. She managed to absorb the powers of Princess Luna and claimed she would sell the staff at an auction, allowing whatever villain who wanted it to do whatever they wished with it. 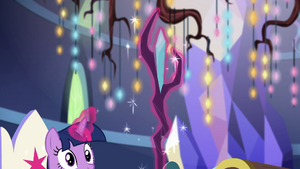 The Staff of Sacanas.
Add a photo to this gallery
Retrieved from "https://evil.fandom.com/wiki/Staff_of_Sacanas?oldid=104783"
Community content is available under CC-BY-SA unless otherwise noted.