The Evil Wiki
Register
Don't have an account?
Sign In
Advertisement
in: Evil Realms, Technology, Doomsday Scenario,
and 14 more

Star Wars: The Clone Wars episode "The Gathering" (as Ilum)

Star Wars Episode VII: The Force Awakens (as Starkiller Base)

Be a base for the First Order.

Destroy other planets.
Assert the First Order's dominance over the galaxy.

Starkiller Base, formerly known as Ilum, was an icy planet in the Unknown Regions that served as the headquarters of the First Order 3 decades after the Battle of Endor from Star Wars: Episode VII The Force Awakens. The base was commanded by General Hux and was armed with a superweapon capable of destroying entire star systems such as the Hosnian system, which the First Order viewed as an evolution of the planet-destroying capabilities of the Galactic Empire's Death Star.

Ilum was a planet in the Unknown Regions controlled by the Jedi Order before the Clone Wars. It is where Jedi younglings would go to collect a kyber crystal for their first lightsaber in a rite of passage called "the Gathering."

After the fall of the Galactic Empire, the kyber-rich Ilum was converted into Starkiller Base, which served as a stronghold of the First Order thirty years after the Battle of Endor. Commanded by an unofficial triumvirate of General Hux, Kylo Ren and Captain Phasma, it was armed with a superweapon capable of destroying entire star systems halfway across the galaxy.

The First Order viewed this ability as an evolution of the planet-destroying capabilities of the Galactic Empire's Death Star designs, with the weapon serving as the ultimate culmination of Old Empire research into dark energy translations and hyperspace tunneling.

Under Snoke's order, Hux used Starkiller Base to fire on the capital of the New Republic, Hosnian Prime, and four other planets in the Hosnian system, utterly destroying the planets and a significant portion of the New Republic's fleet. This is a crime of an even greater scale which succeeded the destruction of Alderaan committed by Grand Moff Tarkin.

Starkiller Base was ultimately destroyed by a Resistance attack due to a weak point exploited by pilot Poe Dameron, causing the implosion of the entire planet as the superweapon was firing upon the Resistance base on D'Qar, which is a way of destruction similar to that of the first Death Star. The stored stellar energy then expanded, causing the planet to turn into a star. 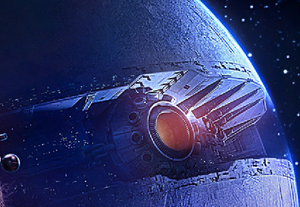