The Starlight Carnival is a hi-tech, carnival-like astronimically-themed park that is one of the most magnificent attraction areas of Doctor Eggman's Incredible Interstellar Amusement Park and the second or third stage in Sonic Colors, depending if the player chooses it or te Sweet Mountain first.

The place is set in space surrounded by a huge fleet of spaceships with colorful neon lights and decorative neon boards, and fireworks and laser beams illuminating the dark night. There are also many lighted statues of the starry nights' star constellations, like the Archer (Sagittarius), the Bull (Taurus), the Lion (Leo), and the Whale (Cetus). Much of the gameplay focuses on Sonic running on a purple translucent path of light and Quick-Stepping to avoid enemies. The Egg Pawns in this area are seen wearing marching band hats, playing trumpets and dancing in order to keep the festive atmosphere at maximum level. There is also a boss encountered in Starlight Carnival, a orca whale-like warship of Eggman called Frigate Orcan.

Sonic runs out of a ship onto a purple energy path, a recurring feature of Starlight Carnival. He is soon confronted by two Aero Chasers who attempt to shoot at him with their lasers, but they are not looking where they are going and soon crash into a parked shuttle. Sonic must then use his homing attack on some floating objects to prevent himself from falling as he is launched onto another path, leading to another ship.

Inside the ship the player can take numerous paths - the Blue Wisp is introduced, allowing Sonic to smash his way through enemies and boxes blocking his path, or to temporarily turn the blue rings above him into cubes to stand on. An extra life can be obtained if Sonic makes it all the way to the top here. The Pink Wisp, if unlocked, can be used to access an area containing Rings.

Sonic will then freefall to another path where he will be chased by Motobugs. He can boost all the way and use Quick Step to destroy them, in the process refilling the boost gauge. Eventually more ships warp in and Sonic will be flung into one of them. The Blue Wisp has to be used again to progress here - if the player is feeling daring, there is an area to explore above this path containing Rings, more enemies, another Blue Wisp capsule and a Red Star Ring. Afterwards comes a corridor with crushers, for which Sonic must stop to wait for them to rise up to pass through. One final energy path leads to more objects floating in space that must be Homing Attacked, before falling into one final ship containing the Goal Ring.

This is a relatively short act that takes place entirely indoors. This act introduces bomb blocks, which explode after Sonic touches them. If Sonic is too close when they explode, he will take damage.

The Pink Wisp can be used to access secret areas above the starting position or later on in the act. There is a switch halfway through the act guarded by spikes that can only be accessed while using Pink Wisp. Most of the red rings in this level involve clever use of the Pink Wisps in the level. Eventually Sonic must use Blue Wisps to smash through piles of boxes and Egg Pawns armed with guns. The Goal Ring can be reached afterwards.

This act is entirely outdoors, and features no Wisps. The main focus here is on yellow tri-springs. They will move with Sonic while traveling from left to right, but if traveling from right to left, the spring will carry on moving to the right which could be fatal, so take care. The stomp action can be used to gain extra height and reach rings Sonic otherwise cannot.

Halfway through the level there is a checkpoint, where the difficulty increases. This time Sonic will lose a life if he falls, and the platforms will drop a few seconds after Sonic lands on them. Along the way there are numerous bonuses on platforms off to the side to tempt the player. There are also badniks emitting electrified fields around them, which will cause Sonic to lose control (and possibly die) if he comes into contact so be careful. At the end, the stomp action must be used to achieve the height needed to reach the Goal Ring.

This is another short act, taking place entirely inside a ship, featuring only Purple and White Wisps. The main enemies here are disco ball-like objects randomly firing off balls of green energy in all directions, which can be tricky to avoid. These can only be destroyed while using Purple Wisps.

Towards the end of the act, Sonic can take an easier lower path, or the path above which will lead to red special rings with (difficult) use of the Purple Wisp. Either way, the Goal Ring is at the other end. On the Wii version, using AR or Gecko cheats, it is possible to jump on to and run on the disco ball-like dangers.

This act starts off in a similar way to Act 1. The Green Wisp is introduced in this act - Sonic uses this to progress in the act particularly where trails of Rings are present, using Light Dash to dash through them.

Sonic uses a zip wire to reach another area with spikes and a Pink Wisp capsule before riding another purple energy path to a wide open area containing many enemies. Sonic must make his way up the ship, defeating enemies along the way to make Green Wisp capsules appear, enabling him to use the Hover ability to ascend. If Sonic goes out of his way as he goes up, he can find various bonuses including lives. The Goal Ring is reached at the very top.

Another outdoors act, this one focusing on the Green Wisp. This act involves lots of usage of Hover and pressing switches to make trails of rings appear. Below the starting level Sonic can find a red ring and an extra life - to obtain the former Sonic can give himself more time if he falls down and activates Hover as soon as he is at the right height. The red ring is at the other end, where a Green Wisp capsule will appear to replenish his energy. The left side contains a similar area with an extra life. On this side there is an alternate path up, containing more Rings. The Goal Ring is found at the top. 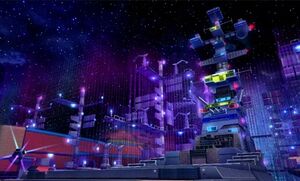 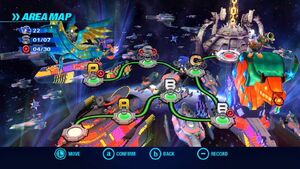 An area map of the Starlight Carnival zone.

An artwork of the Starlight Carnival zone. 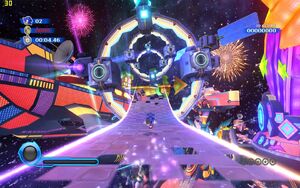 The Starlight Carnival park as seen in the Wii version of Sonic Colors. 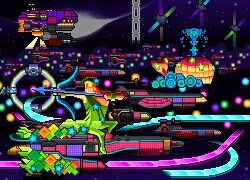 The Starlight Carnival park as seen in the Nintendo DS version of Sonic Colors.

An artwork of the Starlight Carnival tourist attraction. 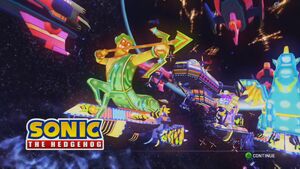 A promotional artwork of the Starlight Carnival tourist attraction. 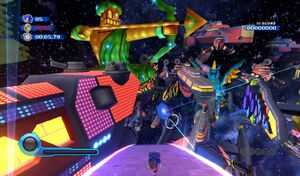 Sonic among many others are "welcomed" to the Starlight Carnival. 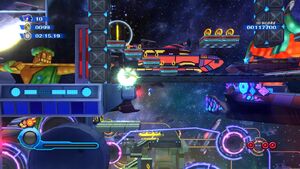 Large starships, bright neon signs and many other fantastic landmarks and celestial features found inside the Starlight Carnival park. 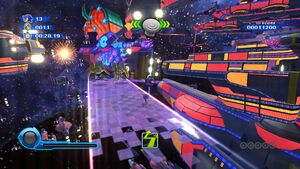 A long translucent, purple road amongst many neon signs and starships in the outside areas of the Starlight Carnival park. 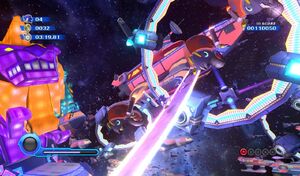 2 lighted statues of winged, blue Capricorn and a purple Leo among many spacefaring machines and celestial wonders in the outdoor areas of the Starlight Carnival. 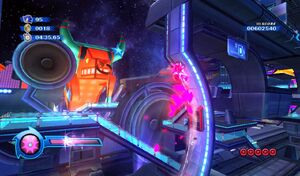 A lighted statue of a scarlet Taurus seen in the background amongst the platform stairs and the shopping centres in the indoor areas of the Starlight Carnival.
Add a photo to this gallery

Retrieved from "https://evil.fandom.com/wiki/Starlight_Carnival?oldid=109088"
Community content is available under CC-BY-SA unless otherwise noted.