Stepford, also known as Stepford Village, is the idyllic, modern-day suburban Connecticut town in the United States of America and it is home to its iconic and creepily beatific (and bio-mechanical) housewives publicly dubbed the "Stepford Wives. It is the titular main setting of the popular 1972 satirical thriller book by writer Ira Levin as well as of its 1975 science-fiction horror movie The Stepford Wives along with its 1980 made-for-television sequel Revenge of the Stepford Wives and 1987 made-for-TV sequel/remake film called The Stepford Children, of its 1996 TV movie adaptation The Stepford Husbands, and of its 2004 sci-fi horror comedy movie adaption of the same name. This seemingly humble but dangerously very clean township is where all the married men (particularly those consisting the conspiratorial Stepford Men's Association), and their fawning, submissive, impossibly beautiful wives calls this eerie place home, but the town itself represents the very concept of men wanting obedient but mindless women instead of the real thing.

Because of the very thriller novel and its eponymous film adaptions it spawned, Stepford even gave birth to its coined symbolic notion known as "Stepfordization" (which the novel's "Stepford Program" is based on), which is transforming into or creating such a conventional upper-class-like environment populated by materialistic people (who too are "Stepfordized" in some ways) where the men are soulless strivers and the women who are automatons (robots as one can say), therefore the said term is the need of perfecting, the desire to beautify.

Joanna Eberhart, a talented photographer newly arrived from New York City with her husband and 2 children, eager to start a new life. As time goes on, she becomes increasingly disturbed by the zombie-like, submissive Stepford wives, especially when she sees her once independent-minded friends – fellow new arrivals to Stepford – turn into mindless, docile housewives overnight. Her husband, who seems to be spending more and more time at meetings of the local lodge of male citizens called Stepford Men's association, is mocking her fears.

As the story progresses, Joanna becomes convinced that the wives of Stepford are being poisoned or brainwashed into submission by the men's club. She visits the library and reads up on the pasts of Stepford's wives, finding out that some of the women were once feminist activists and very successful professionals, while the leader of the men's club is a former Disney engineer and others are artists and scientists, capable of creating lifelike robots. Her friend Bobbie helps her investigate, going so far as to write to the EPA to inquire about possible environmental toxins in Stepford. However, eventually, Bobbie is also transformed into a docile housewife and has no interest in her previous activities.

At the end of the novel, Joanna decides to flee Stepford, but when she gets home she finds that her children have been taken. She asks her husband to let her leave, but he takes her car keys. She manages to escape from the house on foot, and several of the men's club members track her down. They corner her in the woods and she accuses them of creating robots out of the town's women. The men deny the accusation, and ask Joanna if she would believe them if she saw one of the other women bleed. Joanna agrees to this, and they take her to Bobbie's house. Bobbie's husband and son are upstairs, with loud rock music playing – as if to cover screams. The scene ends as Bobbie brandishes a knife at her former friend. In the story's epilogue, Joanna has become another Stepford wife gliding through the local supermarket, and has given up her career as a photographer, while Ruthanne (a new resident in Stepford) appears poised to become the "perfect" conspiracy's next victim.

of Desperate Housewives, Rex Van de Kamp tells his wife, Bree, that he wants a divorce because she is "too Stepford". 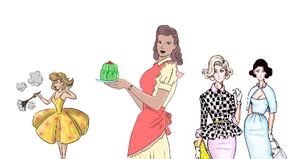 The Stepford Wives
Add a photo to this gallery

Retrieved from "https://evil.fandom.com/wiki/Stepford?oldid=76406"
Community content is available under CC-BY-SA unless otherwise noted.