Rudolph the Red-Nosed Reindeer: The Movie

Thousands of years ago

To unleash Stormella's magic upon any who would stir her ire.

Stormella's Wand is a magic wand that is the signature prized possession of the once mean snow sorceress Stormella and an object in the 1998 animated holiday film Rudolph the Red-Nosed Reindeer: The Movie.

It is a triangular crystal rod made of solid ice with a pointy tip on top.

The wand is the source of Stormella's power. It is but unclear when it was made or how she got it. She used it to blast of cold ice and snow.

She can also use it to cast spells as she used it to make herself nice or could give Rudolph a normal nose if he had wished for it.

Stormella gets all her magic from her wand. It is said she uses causes snow storms (hence her name).

After two of Santa's elves Boone and Doggle accidentally destroy her ice sculptures of her ice garden, She shows up at Santa Claus's workshop, freezing everything in rage. Once she finds which elves are responsible she demands Santa hand them over, but Santa refuses. Therefore Stormella closes her ice bridge to the public, saying that if anyone dares to cross it, she will cause a storm big enough to bury the North Pole.

Years later, a young buck named Rudolph, who had runs away from home. His friend Zoey goes to look for him, desperate she crosses the Stormella's bridge. However Stormella catches her and she can initate her threat of creating the storm of the century. Stormella makes an ice wall to keep Zoey from escaping, then she is caught and locked up. 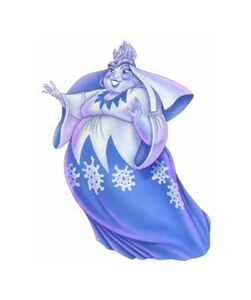 Stormella
Add a photo to this gallery
Retrieved from "https://evil.fandom.com/wiki/Stormella%27s_Wand?oldid=100060"
Community content is available under CC-BY-SA unless otherwise noted.