The Swamp of Sadness is a deadly swamp that symbolically represents pure depression, and is an early location in Fantasia in The Neverending Story.

It is where the giant turtle Morla, the Ancient One, lives, and where he informs Atreyu of the remaining distance for his journey to reach the Southern Oracle, ten thousand miles away.

Legends say that whoever lets despair overtake him or her will sink into the swamp.

Artax, Atreyu's horse, was the swamp's most unfortunate victim. Grieving, and barely able to go on, Atreyu is sinking into the swamp when Falkor the Luckdragon swoops in and rescues him, just as Gmork, the Nothing's evil wolf-like servant, is almost upon him.

The Nothing devours all of Fantasia, save for a single grain of sand and the Childlike Empress. Bastian uses his imagination to restore Fantasia to its former glory, and Atreyu is seen riding Artax across his homeland in the Grassy Plains. The Swamp of Sadness was not seen again in the new Fantasia. 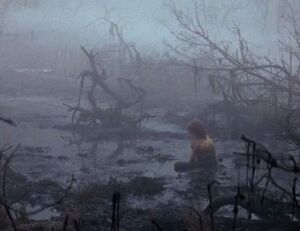 The Swamp of Sadness

The Swamps of Sadness 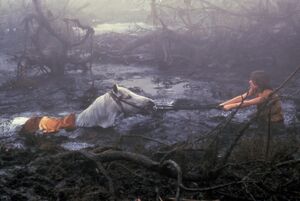 The Swamp of Sadness