Sweet Tooth's Carnival of Carnage, also sometimes known as the Carnival of Carnage, is a titanic, nightmarish circus big top-styled mobile fortress of doom created by Sweet Tooth's followers, the Clowns in their insane figurehead's honor. It was edicated to the memory of the late Needles Kane, Sweet Tooth's original name. It serves as the final boss of the 2012 reboot videogame Twisted Metal, and the boss battle is separated into 4 phases as the players work their way through this monstrous war machine.

The Carnival of Carnage is enormous in size, designed to resemble a carnival big top, and moves on three huge sets of wheels. The entire carnival is a mobile weapon, so getting in (let alone destroying the thing) is quite a challenge. It has a fire-breathing clown head on the bottom, which also acts as an elevator into the vehicle. The main area of the Carnival is modeled after a huge pinball machine with large bumpers and explosive pin balls. At the end is an enormous fanged jester head, which blocks the way to a long twisting pathway filled with obstacles. These include giant maces, exhaust pipes that shoot flames, giant rotating blades, large axes, and huge spheres are rolled down to crush intruders. At the top of the Carnival, there is a hanger holding a polka-dotted helicopter used for reconaissance and the main control center of the entire vehicle- the Sweet-in-the-Box, a large fiery clown head mounted on a crane-like appendage. It is well armored and can headbutt and bite at its targets, as well as breath huge fire blasts and fire missiles from its nose. However, the Sweet-in-the-Box is the weakpoint of the entire Carnival of Carnage and it has a notable weakness of its own, a sizeable hole on the top that seems to act as the entrance into its control room. If one were to drop something akin to bombs into this hole, the Sweet-in-the-Box would be destroyed. The Carnival is also home to and defended by dozens of the Clowns who either drive versions of Sweet Tooth's ice cream truck or guard the main area of the Carnival with either chainsaws or bombs.

After Sweet Tooth's demise, the Clowns never stopped worshipping him and began building the Carnival of Carnage in his honor. They drove it across the land, seeking for signs of their lord's return, for it was said that one day Sweet Tooth would return crazier and stronger than before. However Calypso took advantage of the Carnival, making it into Dollface's final challenge in the Twisted Metal Tournament. She fought her way up the levels of the Carnival and finally managed to take down the Sweet-in-the-Box, bringing an end to the entire Carnival of Carnage. 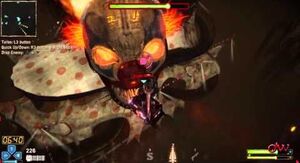 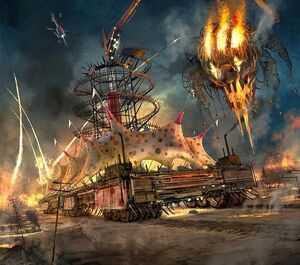 A concept art of the Carnival of Carnage. 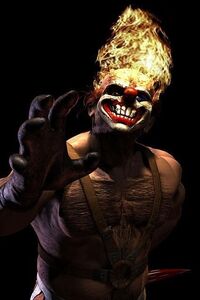 Sweet Tooth
Add a photo to this gallery

Retrieved from "https://evil.fandom.com/wiki/Sweet_Tooth%27s_Carnival_of_Carnage?oldid=64159"
Community content is available under CC-BY-SA unless otherwise noted.