The Sword of Darkness was an evil sword used by Tommy Oliver when he was under the maniacal intergalactic witch Rita Repulsa's power as the Evil Green Ranger in Season 1 of Mighty Morphin Power Rangers.

The Sword of Darkness was originally belonged to Zordon but 10,000 years ago it was stolen from him after a Knasty Knight defeated his soldiers in battle. After stealing the sword, Knasty Knight presented it to Rita as a prize. Rita and her forces would keep the weapon before eventually bestowed the weapon to brainwashed Tommy Oliver in order to maintain her hold on him.

The bewitched Tommy Oliver displayed his powers to the Power Rangers with the Sword of Darkness in his hand. To maintain her evil spell on Tommy, Rita decided to give him the sword, but before that, she put his worth for the weapon into a test by having him defeating a squad of Putties using his skills alone. He passed the test and received the weapon.

Armed with the Sword of Darkness, Tommy's power was extraordinary. He battled four of the the Rangers after transporting their leader, Jason, the Red Ranger, into the mysterious Dark Dimension. Tommy then showed his skill with the sword by holding his own against the other four and used the sword's power to bring them to their knees. But the Rangers summoned their Dinozords and formed the Megazord. Using the Mammoth Shield, the Megazord reflected the Green Ranger's attack. Knowing he was outmatched, Tommy retreated. Tommy then used the Sword of Darkness against Jason in the Dark Dimension and was just about to kill him when Billy teleported Jason back to the Command Center. In a plot to eliminate the Zords, Rita grew Tommy to the size of the Megazord. He then used the Sword of Darkness against the Megazord and, with help from Rita's monstrous lackeys Goldar and Scorpina, he defeated the Megazord and caused it to fall into the Earth.

However, Zordon brought the Megazord back. After his Dragonzord lost, Tommy used the Sword of Darkness one final time against Jason in an epic duel. Jason defeated Tommy by knocking the sword out of his hand with his charged Power Sword and used his Blade Blaster to destroy the Sword of Darkness, thus freeing Tommy from Rita's evil spell.

Return of the Sword

The Sword of Darkness reappeared when Rita Repulsa decided to form the Mutant Rangers, though it is unknown if it was the actual sword itself. However, her former master-turned-husband Lord Zedd claimed that the second Sword was forged out of fragments of the original that destroyed prior. It was wielded by the Green Mutant Ranger, who used it against Tommy. The Green Mutant Ranger was last seen wielding the Sword of Darkness when fighting the Dragonzord, before he was destroyed.

Sword of Darkness is an unmistakably powerful weapon, so much that it allows its wielder to challenge the combined might of five Mighty Morphin Rangers and its equivalent Red Ranger's Power Sword. In addition of maintaining its wielder's brainwashing effect as long as the sword remain intact, Sword of Darkness can conjure devastating lightning bolts that arguably fatal on humans as well as severely crippled Rangers in one blast. As seen in the final duel between Jason the Red Ranger and brainwashed Tommy Oliver the Green Ranger, the user can also summon a trail of damaging fissure upon being struck on the ground. 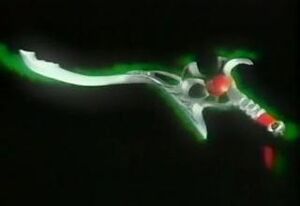 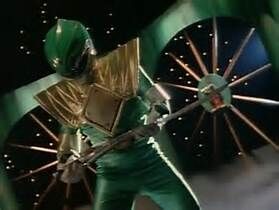 Retrieved from "https://evil.fandom.com/wiki/Sword_of_Darkness?oldid=81481"
Community content is available under CC-BY-SA unless otherwise noted.