The Tyrant Virus, more commonly referred to as the T-Virus, is a man-made mutagenic plague and a staple of the early Resident Evil survival horror videogames and later the Resident Evil sci-fi horror movie franchise. Created by the Umbrella Corporation, the T-Virus was derived from Progenitor, a non-carcinogenic virus originally discovered in West Africa. Umbrella and other organizations have used the T-Virus as a catalyst for producing various types of biological weapons.

In the early years of the Umbrella Corporation, the company's three founders - Oswell E. Spencer, Edward Ashford and James Marcus - attempted to extract the Progenitor Virus from its natural African habitat and conduct research upon it in facilities within the United States. This proved to be difficult as the virus could not survive outside its natural environment, but eventually Umbrella built the necessary facilities to recreate the proper conditions to house the Progenitor flowers and extract the virus.

Throughout the 1970s, Marcus carried out extensive research upon Progenitor, experimenting with its effects on different species in order to produce an efficient bio-weapon. Many tests failed, but Marcus later came upon the idea of combining the virus with leech DNA. The attributes of Progenitor and the leeches meshed well together and by 1978, Marcus had created the first primitive strain of the Tyrant Virus.

Though most of the research for the virus took place within the Arklay Laboratory underneath the Spencer Mansion facade, some eight miles northwest of Raccoon City, and the Umbrella training facility under Marcus' orders, covered by the American Umbrella offices, Spencer's Umbrella empire in Europe raced against Marcus to adequate the T-Virus to create a virus with even greater destructive potential. Marcus' dreams to overthrow Spencer and his attitude towards the virus as a "money-spinning tool" for Umbrella were never fulfilled, as he was murdered before he could enact them. William Birkin came to be known within Umbrella circles as the true creator of the T-Virus.

Research on the T-Virus continued for many years following Marcus' death and saw the development of several T-viral offshoots, created not only by Umbrella but other illicit groups as the virus was later distributed over the global black market.

The T-Virus is built like many viruses. As the virus makes contact with a cell's membrane, it inserts its genetic coding into the cell. The cell absorbs the viral genome into its own genetic make-up, which takes over the cell's functions. The cell begins to produce offspring of the original virus. The new viruses are then released from the host cell and infect the neighbouring cells, which starts the process all over again.

The T-Virus can only properly function by consuming the cell in order to produce its energy. This slow breakdown of cells leads to the gradual breakdown of the host, causing necrosis. The virus incorporates itself into the host's DNA, which substantially alters it. This is why creatures, such as bees and spiders, only have very minor mutation, such as increased size, when compared to the human mutation caused by the virus.

Should the human host be alive at the time of infection, all higher brain functions are destroyed. This leaves only the cerebellum to govern behavior. This leaves the infected host with a very animalistic behaviour. As the virus spreads, it damages the hypothalamus. This produces a massive flood of neurotransmitters, enzymes, and hormones such as norepinephrine and dopamine. These effects, combined with the painful symptoms of the infection, induce a psychotic rage, persistent hunger, and increased aggressiveness in those infected.

Should the human host be dead at the time of infection, only enough energy is produced to power the lower brain functions. These functions are responsible for the most primal instincts, such as walking and eating.

In either case, their late-stage appearance and behavior are characteristics of their name-sake, a zombie.

Should a late-stage human host be rendered unconscious, the body will lay in a dormant phase appearing to be dead. In actuality the host is rapidly mutating due to the T-Virus becoming hyperactive. Within the time frame of an hour, the decayed skeletal and muscular system is reconstructed into a stronger and more durable form. Development can be seen of sharp canine teeth and razor claws, fresh blood seeps into remaining skin giving it a reddish hue, advances in decomposition, and intact eyes become a bright white. Umbrella researchers at the Arklay Laboratory have dubbed this stage "V-ACT", referring to the resulting creature also known as a "Crimson Head". To awaken, the brain must be jolted back to consciousness with a slight but important increase in intelligence, and large increase in agility and aggressiveness. As a consequence of this rapid mutation, cellular breakdown hits a critical point where the host cannot regenerate properly and can be killed permanently.

Depending upon the strain, the V-ACT may have different results. In the strain released in Raccoon City, most V-ACTs usually resulted in creatures named by RPD staff as "Lickers" which are completely blind and use their hearing to detect prey. At which point, they use their long tongues to strangle, impale, or decapitate their prey. At close quarters they also have sharp claws to slash their prey. Lickers may eventually evolve into a more advanced stage with larger claws. Lickers also have exposed brains which serve as a weak point.

An oddity of V-ACT is a creature known as "Suspended". Only one specimen of this creature is known to exist. What is actually is, is unknown. It could be an in-between stage of a zombie and Licker or some kind of rare mutation V-ACT takes on. If it is a zombie partially evolved into a Licker, it would account for why its unable to spear prey with its tongue. It's only capable of grabbing its prey and using its tongue as a whip.

Albert Wesker notes that he observes similarities in the apparently random mutations endowed by the virus (as examples he mentions the mutations undergone by Sergei Vladimir and what he knew of James Marcus' mutations) and explains he believes that the host's mindset is a crucial factor in explaining the mutation (e.g.; Vladimir becomes what Wesker calls "a monster whose very body is the picture of suffering", revealing what Wesker considered to be Vladimir's true self, and the rejuvenation experienced by Marcus, an aged man who understandably desired control and the restoration of his vibrant youth, characteristics that were carried to his own eventual mutation, including his true madness and the horrific mutation that overcame him in the end), and briefly wonders where does this theory fit with his own mutations.

There have been multiple occurrences of the T-virus being released within populated areas, infecting humans and other forms of life and resulting in widespread destruction.

Below is a list of different creatures that have been created via the T-Virus, whether through accidental exposure or purposeful infection as part of bio-weapons development. 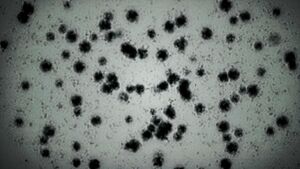 The "T" virions through a microscope.
Add a photo to this gallery
Retrieved from "https://evil.fandom.com/wiki/T-Virus?oldid=92639"
Community content is available under CC-BY-SA unless otherwise noted.