To infect other people that came into contact with and enchance their natural abilities (failed).

The Titan formula, which also known as "TITAN", is a compound of Bane's Venom compound and Poison Ivy's dangerous plants from the critically-acclaimed 2009 video game Batman: Arkham Asylum. This had the same effects of Bane's venom, except it takes a smaller dose for the process. The idea was Joker's, which he fooled Arkham Asylum's scientist Dr. Penelope Young into making it for him, who began testing it on inmates, even though she did not know that she was under Joker's influence.

After Joker broke free and took over Arkham Asylum, with the aid of Harley Quinn, Batman went after him. As he finds the Joker, he sees him standing on top of a transfer cell. Joker opens the cell to reveal a Titan enhance inmate that the asylum had secretly been working on. Batman engages it in battle, but then the inmate soon dies from a heart failure that was caused by the formula. After seeing this, Joker was disappointed and told himself to look for stronger test subjects.

Later on, as Batman investigates the Arkham Asylum, he and Commissioner Gordon finds Bane imprisoned at the medical center, being drained from his venom to complete the Titan formula. Bane explains to them that Dr. Young did this to him, which created these series of events. Suddenly, Joker appears on a nearby screen and sees Bane revealed to Batman and Gordon. This makes Joker inject Titan into Bane, allowing him to regain his full strength to deal with Batman. However, Batman gains the upper hand as he activates his vehicle to ram Bane into the ocean.

As Batman continues his search, he stumbles upon Dr. Young's research and discovered that she is in league with a person named Jack White, who was unaware that he was actually the Joker. Young's purpose for the formula was to help patients survive harsh therapies. As she discovered Joker's true intention for the chemical compound, she stop the manufacturing of it, which made Joker come to Arkham Asylum. Batman then finds Dr. Young being held captive by Victor Zsasz .Batman knocked him out and saved Dr. Young. She tells him that they make the Titan compound at a hidden lab at the botanical garden. She walks over to a nearby picture frame that has safe behind it, containing the key codes. But as she reveals it, it has a painted face on it, which causes it to explode, thus killing her.

Batman heads to the botanical gardens, where he encounters Joker, along with two of his goons. Joker grabs out a gun filled with the perfected Titan compound and shoots it at his two henchman. Joker then makes a run for it with a supply of TITAN while Batman deals with his TITAN-enchanced henchmen.

In order to create a cure, Batman has to look for plant spores, located in Killer Croc's sewer lair. While collecting the spores, he runs into Killer Croc. Croc chases him and corners him at the end of his lair. Luckily for Batman, he detonates a hole beneath him, making him fall beneath it.

As Batman gets the antidote ready, Joker throws a party at Arkham and invites Batman there. As Batman arrives, Joker unleashes two Titan enhance security guards upon him, but they were defeated by Batman afterwards. After Joker watches this, he congratulates Batman and reveals Commissioner Gordon to him. Joker then shoots a Titan dart at Gordon, but Batman takes the bullet for him. As Batman tries to resist the change, Joker takes an overdose of the drug.

After Joker transforms, he takes Batman to the rooftops, where they have their last battle up there. Joker urges Batman to transform as a way to defeat him, but Batman refuses by taking the cure in front of his eyes. Surprised by this, Joker plans on killing Batman head on. Fortunately, Batman managed to defeat Joker by spraying explosive gel on his hand and throws it into Joker's face.

Bane, after the events of the previous game, made his way to Arkham City after he discover twelve Titan contain transported there from Arkham Asylum. He hid himself inside an abandoned toy factory and contacted Batman there. The two made an agreement to destroy six containers each.

After Batman finds and destroys six containers, hidden throughout Arkham City, he reconciles with Bane at the toy factory. Just then, several TYGER guards enter the building. Batman and Bane team up to take them out. After that, Bane reveals the final six Titan containers he found, but reveals to Batman that he was saving it for himself and was about to kill him. However, Batman traps Bane in a cage and revealed to him that he knew about his true intentions for Titan and used him. He then destroys the remaining Titan containers with his explosive gel and leaves Bane to the authorities.

The Penguin had uses for it. After he discovered it being shipped from Arkham Asylum, he stole some and used it on one of his thugs. He then put him in his museum collection. As Batman came looking for Mr. Freeze there, Penguin attempted to kill him by unleashing the Titan from a cage dangling above him.

After Joker's death, Harley Quinn took over and used the compound on one of her thugs. He was not seen then until Harley released him to stop Robin from saving Batman.

At the end of the video game, Arkham Asylum, Scarecrow and Killer Croc grabs onto a crate of Titan floating in the ocean. 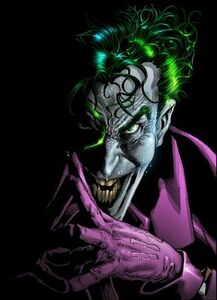 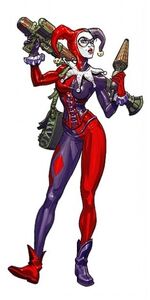 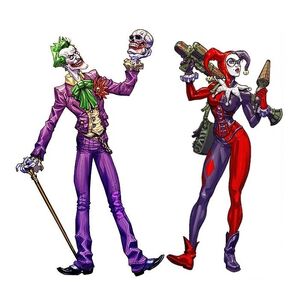 The Joker and Harley Quinn
Add a photo to this gallery

Retrieved from "https://evil.fandom.com/wiki/TITAN?oldid=84782"
Community content is available under CC-BY-SA unless otherwise noted.