The Evil Wiki
Register
Don't have an account?
Sign In
Advertisement
in: Articles under construction, Evil Lairs, Technology,
and 13 more

To destroy the Ninja Turtles.

To aid both Krang and the Shredder in taking control of both Earth and Dimension X.
To aid the Shredder and the Foot Clan in their criminal activities.

The Technodrome is the semi-spherical tank-like metallic mobile fortress of Krang and the Shredder of the Foot Clan, the 2 main villains in the 1987-1996 animated Teenage Mutant Ninja Turtles series, the Teenage Mutant Ninja Turtles Adventures comics from Archie Comics, as well as the UK Hero Turtles comic book series, and most TMNT videogame adaptations. The Technodrome was also central to the plot of the 2009 Turtles Forever movie. It also appears in the 2012-2017 animated series and the IDW comics.

The Technodrome was designed and built by Krang and his main engineer, Drakus, in Dimension X, Krang's home. At some point before the series, Krang took the completed Technodrome and banished Drakus to Earth. Krang is later separated from his body and banished to Earth himself along with the Technodrome. He meets Shredder and they soon formed their partnership.

Although menacing at first glance, throughout the course of the series, the Technodrome is almost always powerless and stuck at some remote location (be it encased in ice, sunken under the ocean, embedded in the Earth's core, or trapped in Dimension X), making its full capabilities never realized. The closest the Technodrome came to show its full capabilities was in the season 3 finale of ("Big Blow Out"), and to a lesser extent the season 7 finale "Shredder Triumphant!". In the former episode, the Technodrome produced cutting equipment from hatches, raised up on hydraulic legs and expanded the dimensional portal outwards. Though the Technodrome often manages to acquire enough power to operate, it is always deactivated by the Turtles before any real havoc can ensue.

In the season 8's final episode "Turtle Trek", the Turtles destroys the Technodrome's engines and trap both Krang and Shredder in Dimension X. The Technodrome becomes entrapped in Dimension X for good, and it is pulled into the pit of a ferocious tentacled alien animal whose size rivals the Technodrome itself. This finally renders it inoperable, and it was never seen again for the remainder of the series until the final episode, in which Donatello and Michaelangelo enter it to retrieve Krang's android body; by that point, the Technodrome has been irreparably damaged and long abandoned.

In the 2-part episode "Planet of the Turtleoids", the Shredder and Krang build a smaller version of the technodrome called the Mini Technodrome. It varies only in slight ways, the only major difference is the size and color (from white to gold). This Technodrome is destroyed by the Turtles when they returned in a spacecraft equipped with a pulverizer ray, leaving Shredder to retreat back to the original Technodrome.

In the first episode of season 4, "Plan 6 from Outer Space", it is learned that the Technodrome landed on an asteroid in Dimension X. In the episode "The Dimension X Story", Krang finds out that the asteroid has a volcano. He comes up with a plan to make the volcano erupt, and harness the energy to return to Earth. But due to the Turtles' interference, the eruption instead causes a flow of lava, which quickly solidifies, causing the Technodrome to become half-buried in solid rock.

Early in season 5, in the episode "My Brother, the Bad Guy", Krang and the Shredder finally come up with a plan to return to Earth. However, the Turtles intervene, and although they do get to Earth, they end up trapped in the North Pole. It would remain there, trapped in ice, for the rest of the season.

In season 6's first episode of the season "Rock Around the Block", Krang sets up a super-laser to free the Technodrome from its icy prison. This time, the Turtles are powerless to stop him. However, Bebop and Rocksteady's own incompetence causes the plan to fail, as they accidentally hit the super-laser's controls and direct it to melt the ice directly under the Technodrome. As a result, the Technodrome sinks to the bottom of the Arctic Ocean, where it will remain for 2 seasons.

In season 7's first 13 episodes (the "Vacation in Europe" sideseason, which takes place during season 4), the Technodrome has resurfaced in Dimension X, but once the up-to-date episodes begin, the Technodrome is beneath the ocean, where it has remained since the 6th season. The Technodrome remains trapped until the season finale "Shredder Triumphant". Then, Krang steals some Regenerative Power Cells and uses them to reactivate the Technodrome, and move it to New York City. Donatello re-programs the Technodrome's dimensional portal and sends the Technodrome to Dimension X via remote control, but without Krang, Shredder, Bebop and Rocksteady.

In the series' 10th season finale "Divide and Conquer", the Turtles, specifically Donatello and Michelangelo, travel to the Technodrome once to retrieve Krang's android body. The Technodrome is abandoned and ruined on the planet Balaraphon, following the events of "Turtle Trek". Donatello and Michelangelo find the Technodrome upright and sitting on a small hill. Since it was last seen upside down in a deep hole, Krang and the Shredder must have attempted to repair the massive fortress before declaring it a lost cause.

The appearance of the Technodrome in the world of the 2003 TV series is a major plot point in the 2009 made-for-TV film Turtles Forever. After it arrives in the 2003 cartoon universe following damage sustained to its dimensional portal, the 1987 Shredder uses its technology to find and recover the Utrom Shredder (Ch'rell), Ch'rell and his Foot Ninja henchmen subsequently augmenting the Technodrome with Utrom technology, Ch'rell noting that the Utrom and Dimension X technology work well together despite the 'childish' nature of Dimension X's technology by comparison. The Technodrome gains no new abilities from this change, but is greatly altered in appearance and function. The tank wheels were removed, making it hover constantly, the eye on top was removed, and the laser weapons were altered in appearance. Ch'rell then planned to use the Technodrome and its Trans-Dimensional Portal to conquer the multiverse.

At the end of the movie, Ch'rell is destroyed when the Turtles threw him into the main laser beam of the Technodrome.

After his defeat, Krang and 80's Shredder and Turtles use the still upgraded Technodrome to go back into their own universe where they belong.

The Technodrome also appears in the British Fleetway Comics from the early 1990s. It is similair to its Fred Wolf Cartoon and Archie Comics counterparts, but is usually seen moving around more often.

972 rooms (mentioned in the episode "The Missing Map"). Transdimensional portal. Eyeball missile launchers. 5 trident-shaped laser cannons: two located at the top of the Technodrome at each side of the eye, two on its sides, and one on its front (occasionally, due to animation errors, they aree depicted on other places, usually the rear, or more than 5 are seen). 2 large laser cannons that can be deployed with multiple eyeball missile racks (seen in The Big Blow Out). A mounted surveillance eye on the top A mouser factory (seen in A Thing About Rats). Training facilities for Shredder's henchmen, Bebop and Rocksteady Three-foot-thick titanium armour Huge tank treads, used to move the Technodrome across land or underground from each location. Robot-walker legs that can be used instead of tank treads (seen in The Big Blow Out) Gigantic saw blades and cutting devices (used in The Big Blow Out to get an energy antenna) Pedal-power Generator (used in The Big Rip-Off to generate a small amount of power when Technodrome was completely out of power) Large holding cells Earthquake machine (used in Return of the Technodrome) Various drilling mechanisms Tea- and coffee-making facilities (Season 4) Motor pool area that houses foot bikes and technorovers. (Season 1) Trap Door in the center of the main control room as used in Hot Rodding Teenagers from Dimension X Starfighter deck housing technowings. Classical Japanese dojo rooms. Balance control (during and near the end of Season 3). Anti-gravitation generators making the technodrome able to hover slightly above the ground (used in "Return of the Technodrome"). Disintegrator Unit (season 2 episode "Enter the Fly") Escape pods ("The Foot Soldiers Are Revolting") Relay Room Street Fighter II arcade machine Engine Room Laundry room ("Dimension X Story") A turtle farm where hatchlings are bred for 126 hours before being lightly boiled in a basil and fey broth to form part of Shredder's weekly diet. Two stainless steel clad toilets at either end of the structure with industrial-strength rhino dung collector contraptions. Bonsai Garden. Indoor Pool & Sauna a "war room" with various robotic sentries (season 1)

The transport modules are the vehicles used by Krang, Shredder, Bebop and Rocksteady to move from the Technodrome to New York when the Technodrome is located on the Earth. Although they are best known in their underground drill form, their physical make-up actually changed as the Technodrome moved.

With the Technodrome located under New York City during season 1, there is no need for independent transport modules. In the episode A Thing About Rats, the Shredder uses a kind of transport elevator which extends, but remains connected to, the Technodrome. This type is also used in the arcade game and the Archie Teenage Mutant Ninja Turtles Adventures comics.

With the Technodrome located in Earth's core during most of season 3, the first of the more famous type of transport modules are used. It looks similar to a space shuttle without wings and with a drill in the front. Even Bebop and Rocksteady are able to pilot these transport modules.

With the Technodrome located in the North Pole during most of season 5, the transport modules from season 3 are used once again, this time to drill under the North American continent and towards New York City.

With the Technodrome located under the Arctic Ocean during season 6 and season 7, underwater types of transport modules are used.

From season 3, Donatello also had his own portal that the Turtles could use to travel to Dimension X.

The Technodrome also appears in the IDW comics, and is used by Krang.

By the season 1 finale, the Technodrome is broulght to Earth from Dimension X. This Technodrome is a large spherical spacecraft possessing large weapons all over it, capable of dispatching smaller spherical escape pods as a means of collecting samples from Earth (presumably for further mutation-related experiments). Despite the Technodrome's power, the Turtles manage to infiltrate it and cause enough damage that it crash-lands into the sea, although the last scene shows the Technodrome powering backup. In this series, the Kraang have several Technodromes, many of them in Dimension X.

The Technodrome from the 1987—1996 series later reappears in the crossovers.

Out of the Shadows

The Technodrome also appears in the 2016 TMNT film Out of the Shadows. It is used by Krang, who brings it to Earth.

In many of the older TMNT video games, the Technodrome is the final level of the game and that the Turtles must fight their way through the various sections of the Technodrome to get to the final boss, alternatively either Shredder or Krang (or both in succession) depending on the game.

In the Wii and Playstation 2 fighting videogame TMNT: Smash Up, the Technodrome appears as part of the "Underground" stage. 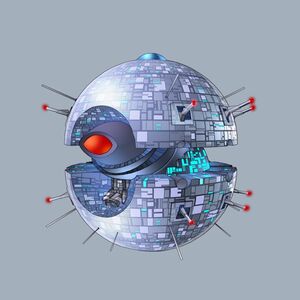 The Technodrome as seen in Turtles Forever cartoon movie. 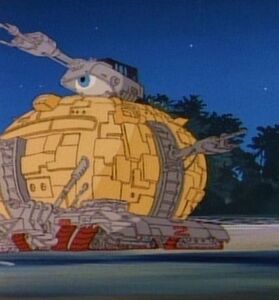 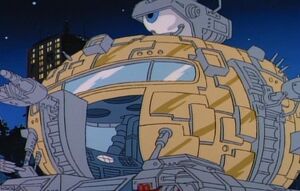 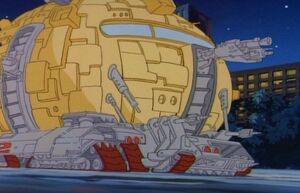 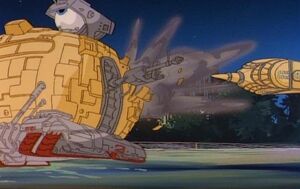 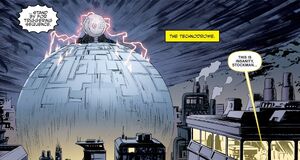 The complete Technodrome as seen in the Teenage Mutant Ninja Turtles comicbook series.