The Temple of Tiamat is a massive ancient temple dedicated to the goddess of chaos named Tiamat and it is located in her own Dimension.

While on duty at Ray's Occult Books, Eduardo Rivera accepted a package. Thinking it was Peter Venkman's order, Eduardo opened it up and found a strange arcane tome instead. Upon looking at it, three ancient letters rose up from the pages and Eduardo had an out of body experience. He found himself teleported to a land reminiscent of ancient Egypt. Unseen and unheard by the people around him, Eduardo followed them to a massive temple. While trying to make contact with a man, Eduardo was discovered by Tiamat. He was issued a warning and sent back to his body.

When the Ghostbusters reached the top of Dana's apartment building, they found themselves in Tiamat's dimension. They immediately saw Tiamat's temple and scaled the steps. They were taunted by Louis Tully and Dana Barrett, both possessed by Terror Birds until Tiamat made her presence known. After they Crossed the Streams, the Ghostbusters found themselves back on the apartment roof. 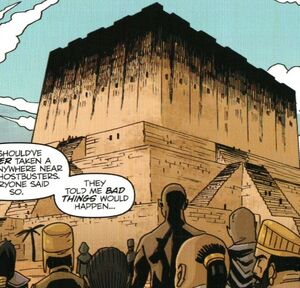 A ziggurat seems to be styled after the Temple of Tiamat and/or built for the worship of Tiamat. 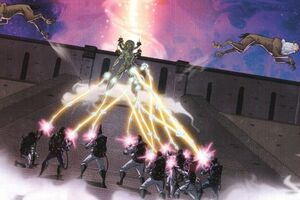 The Ghostbusters battle against Tiamat at her Temple.
Add a photo to this gallery

Retrieved from "https://evil.fandom.com/wiki/Temple_of_Tiamat?oldid=48173"
Community content is available under CC-BY-SA unless otherwise noted.