The Terminal Velocity is the final stage of Sonic Colors and it is a large section of the giant structure that bridges Dr. Eggman's Incredible Interstellar Amusement Park to Earth.

Sonic the Hedgehog has to travel down it to reach the space elevator to Earth. Eggman stops Sonic right at the elevator. Realizing what he must do, he pushes Tails into the elevator without him before the battle against the Nega-Wisp Armor]. After it was over, Eggman got sucked into a black hole by the energy created from the broken Mind Control Ray, as Sonic runs away from it and runs down to meet Tails back at Earth.

Act 1 begins with Sonic racing down the huge space pathway as he is being chased by the Aero Chasers, a bunch of Motobugs and even a Giant Crabmeat robot. The act doesn't officially end, the screen instead just goes white.

The Nega-Wisp Armor serves as the final boss of Terminal Velocity. The stage starts as Sonic and Dr. Eggman are running down the space elevator turning to the left. Eggman first uses Purple Frenzy to put some distance between him and Sonic. He then attacks by using Laser, Spikes, or Cube to try to hit Sonic, having to suck up more Wisps to use the Color Powers. Sometimes, he moves behind you and not only will he use normal attacks, but he might use some combo attacks. Spikes and Cubes at the same time is one, and the other combo is Laser and Cubes at the same time. When he gets close, the player must use a Homing Attack on one of the arms, working up to the cockpit, where the player can use a Homing Attack twice to damage the Nega-Wisp Armor. The player can also boost for a third hit and some rings. After taking a few blows, the machine will hesitate to attack when the announcer proclaims a new ability where Sonic uses all the Wisps' abilities at once, called the Final Color Blaster. Sonic uses this attack to destroy the machine and send Eggman flying, as he explodes into a purple firework in the shape of his logo.

Act 2 is only 35 seconds long. It's just a straight shot down the rest of the pathway after Eggman is defeated. After Sonic beats Eggman, a black hole appears and engulfs Eggman, while following right behind Sonic. The only threat in the Act is the stage, crumbling underneath Sonic's feet, having him either have to Quick Step or jump to avoid falling. Nonetheless, Sonic fails to outrun the black hole, and passes out. The Wisps help him back to Earth.

In the DS version, it is simply an act involving Sonic running down in open space. Sonic will need to constantly gather energy for the Tension Guage to boost to move at high speeds because if Sonic slows down, the Nega-Wisp Armor's claws will approach behind Sonic and hit him. If Sonic runs into the walls, he'll take damage. After this phase, the player proceeds to battle the Nega-Wisp Armor. 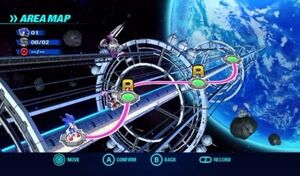 An area map of the Terminal Velocity zone. 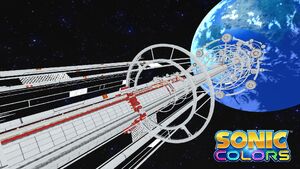 A promotional artwork of the Terminal Velocity area.

An artwork of the Terminal Velocity zone. 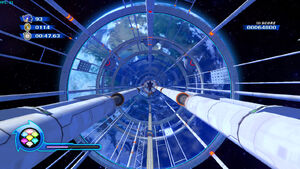 The Terminal Velocity area.
Add a photo to this gallery

Retrieved from "https://evil.fandom.com/wiki/Terminal_Velocity?oldid=63758"
Community content is available under CC-BY-SA unless otherwise noted.