The Evil Wiki
Register
Don't have an account?
Sign In
Advertisement
in: Villainous Events, Folkloric Villainy, Magic,
and 5 more

To serve as the hour of The Devil with both demonic activities and occult practices.

The Devil's Hour is a concept found in numerous world folklore and occult practices, as well as popular fiction, considered by many to be the hours between 3am and 4am - this is the time in which malevolent and unclean spirits such as demons, poltergeists, goblins, fay/fairies and even vengeful ghosts are believed to be at their strongest and the walls between the material realm and those of the dark realm are at their weakest.

The Devil's Hour is related to the Witching Hour, however, due to numerous internet prank channels and "creepypasta" stories, the Devil's Hour has entered a special place in internet culture, often as a meme or cliche - despite this it is still a widely held belief in many parts of the world.

The Devil’s Hour being 3AM is considered significant as it is the opposite hour to the death of Christ. The Bible reads that Jesus Christ was placed on the cross at 9 AM and darkness covered the land from noon until Jesus’ death at 3 PM when Matthew cried out: “It is finished.” Therefore, 3 AM is a significant sign of the devil and dark entities because the time is flipped to mock Jesus Christ, much like when a cross is turned upside down, which often features in many horror films of the satanic persuasion.

The number three is also regarded as a holy number within Christianity as with the Holy Trinity of the Father, the Son, and the Holy Spirit. So, if someone do find themselves wide awake with a jolt at 3 AM, then it is widely believed that the devil just paid you a direct visit.

Phenomena Associated With The Devil's Hour 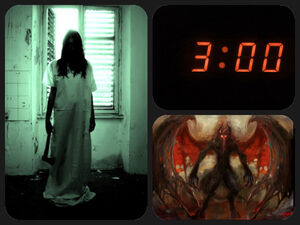 The Devil's Hour
Community content is available under CC-BY-SA unless otherwise noted.