The Further is a dark and timeless astral world filled with tortured dead souls and nightmarish spirits, and it plays a central role in the Insidious horror film franchise. While it is not Hell, it is hinted that it may lead there, as most of the souls that inhabit it appeared to be malevolent and the Lipstick-Face Demon seems to rule it.

Inhabitants of The Further

Among the souls that dwell in the Further are the Doll Family, the Long-haired Fiend, a little boy, the Bride in Black and the Crying Woman.

The Doll Family are the spirits of a family that died violently, with one of twin daughters killing her own family members (her twin sister, her mother and her father) and then herself. They are doomed to relive their last moments. Having been made to relive their deaths over and over again, it is hinted that they have come to enjoy it. The reason they are called the "Doll Family" is because they have been made to resemble mannequins.

"The Ghoul", or the "Long-Haired Fiend", is the spirit of a violent, dangerous, and destructive man. Judging from his appearance and mannerisms, it is possible that he may have been a thug and a murderer when he was alive. In the film, he sexually assaults Renai two times on separate occasions.

The Little Boy is actually not a little boy at all, being the spirit of a an old man who apparently suffered from dwarfism. While he is not a child, he is very mischievous, playing tricks on Renai (changing the song she was playing to "Tip Toe Through the Tulips" and also hiding in Dalton's closet and then jumping out at her in order to scare her). He is later seen chuckling and running through the hallway in the Further by Josh.

The Old Woman (The Bride in Black) is the spirit of an old woman in a dark wedding gown who had been trying to steal Josh's body since he was a boy. She had befriended his astral body in the hopes of luring him out into the Further and taking possession of his body. In every picture that was taken of Josh as a child, she seemed to get closer and closer. For this reason, Josh has a fear of getting his picture taken. In truth, she is a not woman, but a self-castrated man named Parker Crane who assumed his serial killer moniker "The Bride in Black" due to the abusive influence of his mother called the Woman in White.

The Crying Woman is seen when josh first enters the Further. It is not explained why she is crying but it can be assumed that she died under tragic circumstances. Out of all the spirits encountered in the Further, she seems to be the least malevolent.

The Further seems to be under the control of the Lipstick-Face Demon. This nameless devil is a tall creature with pointed ears, two horns on its head, snake-like eyes, a forked tongue, spider-like fingers and hooves for feet. Its skin is literally black with the exception of the distinct red markings on its face. While the Bride in Black is interested in obtaining Josh's body, the Demon seems more interested in Dalton. Though the Demon never speaks in the film, it is capable of speaking, as Lorraine mentions that in a dream she had, she spoke to it and it responded to her in words.

When asked who it was, it responded that it was a visitor. When asked what it wants, it responded that it wanted Dalton. Lorraine claimed she could still hear its voice, implying that the Demon has a chilling voice. The Demon keeps Dalton close by in his home in the Further, which seems to be a amphitheater-like chamber. The Demon has marionettes which it likes to play with. It also seems to enjoy sharpening its nails. The Demon hurts Dalton whenever he is noisy and obstreperous. From this description, it can be gathered that the Demon is a bit of a thrill-seeker, having an interest in theatrics. It can also be gathered that the Demon is sadistic and likes to hurt others. The Demon can usually be found listening to the song Tip Toe Through The Tulips on a phonograph.

Elise Reiner, a close friend of Josh Lamber's mother Lorraine, explains to Renai and Josh that Dalton is what she calls a"traveller", a person that has the ability to astral project. Dalton did that while sleeping and that he has been doing it since he was very young. The reason he is in a comatose state is because he has travelled too far into different spiritual worlds due to a lack of fear (he believes the projections are simply dreams), becoming lost in a land called 'The Further', which is a place for tormented souls of the dead. While his spirit is in the other world, he has left nothing but a lifeless body. The tormented souls crave another chance at life while the demon from the Further plans to possess Dalton for pure malice. However, for a spirit to get into a body, it requires time and energy.

Skeptical at first, Josh later relents when he discovers Dalton had been drawing pictures which resemble the demonic figure Elise described. They run a session to try and communicate with Dalton where the demon uses Dalton's body to fight the group, along with 3 other spirits who want Dalton's body. After the session, Elise calls Lorraine and the two reveal to the couple that Josh also can astral project, and was terrorized by an evil spirit during his childhood. Lorraine shows them pictures from Josh's childhood, revealing a shadowy old woman (the same woman from the beginning of the film) nearer and nearer to Josh in each picture, which explains his fear of photos. Elise suggests that Josh should use his ability to find and help return Dalton's soul, to which Josh agrees.

Josh projects himself into The Further, finds and frees his son, who had been captured by the red-faced demon. In search of their physical bodies, Josh and Dalton flee the demon that is pursuing them. Just before the two awaken, Josh abandons his son to confront the shadowy old woman who appears to be inside his house. As he shouts for her to get away from him, she retreats into the darkness. Moments later, Josh and Dalton both awaken, just as all the spirits vanish.

With the family now happily reunited, Renai, Dalton and Lorraine chat in the kitchen as Elise and Josh pack up from the long night. Josh hands Elise the pictures from his childhood, and as she takes them from his hands, she senses something and takes a picture of Josh. He promptly goes into a rage, claiming she knows that he doesn't like to get photographed. Renai hears Josh yelling and goes into the room to find Elise dead and Josh gone. She searches for Josh and comes across Elise's camera. When she looks at the camera, she sees a picture of an old woman. It's revealed that what Elise saw was Josh's old and dirty hand and nails, similar to the old woman's, implying that she has possessed him. Josh then puts his hand on Renai's shoulder, and she is horrified to see her husband behind her. 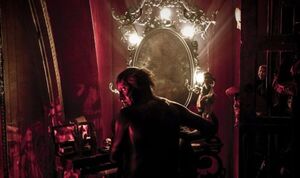 The Lipstick-Face Demon in his Lair.
Add a photo to this gallery
Retrieved from "https://evil.fandom.com/wiki/The_Further?oldid=116003"
Community content is available under CC-BY-SA unless otherwise noted.