To trapped anyone who would open on themselves or others.

The Grimlock is another magical and inescapable prison that resembles an urn and it is one of the many magical artifacts in the 2010 Disney fantasy movie The Sorcerer's Apprentice.

Like the Grimhold, it is designed to magically trap and imprison anyone. When opened, any target that is intended to be sealed inside it by the user will be dissolved into a mass of dust before being sucked in, much like Grimhold. Like the Grimhold, the Grimlock itself appears to show images of the people who are/were trapped in it, because it shows 2 sorcerous archenemies Balthazar Blake and Maxim Horvath after they are sealed inside.

Unlike the Grimhold, however, its sealing powers only last for 10 years on each of its victims, as both Balthazar and Horvath emerge from inside the Grimlock 10 years after being sealed away in it. Also similar to the Grimhold, anyone whom escape from the Grimlock after 10 years of imprisonment manifests as a mass of black dust/ashes before their body fully restores instead of as a mass of disgusting organism/substances.

Second Emperor of the Han Dynasty once use its power to seal his least favorite wife. It later fell into other people's hands (presumably a few times), until it arrived at the hands of Balthazar during his journey in China, presumably in the same year where he met Sun Lok. He later brought it to the Arcana Cabana in New York, presumably not to sell it due to its powers being beneficial to him and intended to use it someday due to having similar properties with the Grimhold's imprisoning powers.

When the young Dave Stutler accidently released Horvath, Balthazar was forced to lock himself and Horvath inside the Grimlock for 10 years before they both escaped seperately to prevent Horvath from killing the young Dave.

The Grimlock was destroyed by Horvath after his escape before he tried to completely destroy Balthazar, who was still trapped in it by dropping it, but failed as Balthazar escaped from it in time. 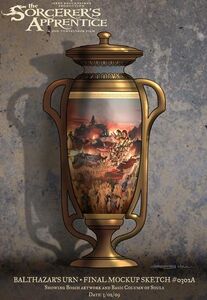 An artwork of the Grimlock. 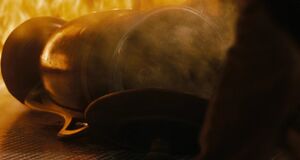 The ashy trapping magic of the Grimlock. 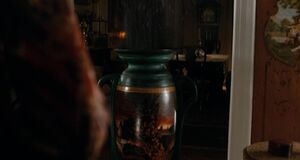 The ashy magic power of the Grimlock. 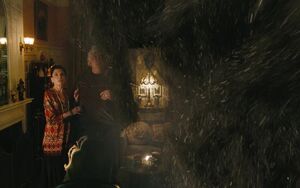 Maxim Horvath is now free and has escaped from the Grimlock before a frightened wealthy Russian couple.
Add a photo to this gallery

Retrieved from "https://evil.fandom.com/wiki/The_Grimlock?oldid=105595"
Community content is available under CC-BY-SA unless otherwise noted.