The Evil Wiki
Register
Don't have an account?
Sign In
Advertisement
in: Villainous Tools and Other Items, Magic, Paranormal, Curses

The Outing (also known as The Lamp)

To pass on the curse of the Jinni upon any unsuspecting victims who would release it from the Lamp.

The Lamp (in Arabic: المصباح, Almisbah) is a mysterious 3,000 year-old oil lamp of Middle Eastern origin that holds the terrifying power of the evil Jinni and it is the eponymous object featured in the 1987 horror movie The Outing (originally known as The Lamp).

This lamp is a black, antique, brass oil lamp with an opening lid modeled like a horned lion and a claw-like hand sculpture inserted on the lamp's pouring hole, holding a ruby gem.

In 1893, a young woman wears a magical bracelet and the dark shadow of the Jinni that came from its Lamp looms over a bloody scene, foreshadowing the violence to come.

94 years later, 3 criminals burglarize a house owned by the now elderly woman with the magical bracelet. The criminals kill her with an axe to her face and find the lamp. A genie is released from inside and possesses the old lady’s corpse to kill one of the burglars by head butting him with the double-headed axe still lodged in the corpse’s skull. The genie finds and murders the other two intruders and the female intruder’s breasts are exposed.

After surveying the crime scene, an officer sends the evidence, including the lamp and bracelet, for display at a natural science museum. From inside the lamp, the genie observes the museum's curator, Dr. Bressling, cataloguing the newly arrived artifacts. Dr. Bressling's teenage daughter, Alex, is also present and she tries on the magical bracelet. In a fit of adolescent angst, she says to her father, "Sometimes I wish you were dead!" She’s unable to take off the bracelet.

Alex’s class goes on a field trip to the museum where her dad works. The genie possesses Alex’s body and convinces her friends to go on an "outing" later to spend the night at the museum. The genie levitates Dr. Bressling’s body and decapitates him with a ceiling fan. The genie embodies more people and museum artifacts to commit acts of violence. Many bloody murders ensue. In the form of a resurrected snakeskin, he murders an opera-singing security guard. Alex’s friend, Babs', breasts are exposed as she takes a bath at the museum. Babs is killed by the demonized snakes during her bath. The genie’s true form is finally revealed as he chases Alex and her friends down the halls of the museum. Help arrives and together, they try to “destroy the lamp to destroy the [sic] jinn.”.

Dr. Wallace and Eve find Alex fleeing through the museum, chased by the jinn, which has revealed its true monstrous form. The jinn tells Alex she is now to be the new keeper of the lamp. Pursued by the jinn, the three manage to flee outside, but the jinn kills Dr. Wallace, which neither Alex nor Eve witness. The jinn then animates Dr. Wallace's corpse in an attempt to trick them. Realizing she must destroy the lamp to banish the jinn, Alex throws it into an incinerator inside the museum. 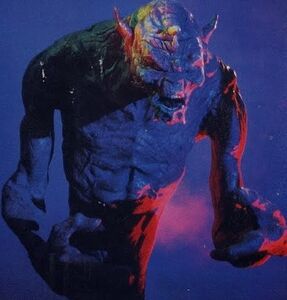 The Jinni
Community content is available under CC-BY-SA unless otherwise noted.