"The Ritual", or "The Ancient Ritual", is an obscure ceremony that deals with blood as an offering only to a primordial race of terrifying entities known as the Ancient Ones and it has become necessary for humanity to perform since its very beginning for the sake of the Earth and for the safety of every human soul. It serves as the important but elusive key element in the 2011 horror comedy movie The Cabin in the Woods.

Long before humans existed, the great and powerful beings known as the Ancient Ones walked and ruled the world. When humanity first appeared, the Ancient Ones decided it would be more entertaining to let them continue their existence than destroy them, under specific guidelines that humanity had to adhere to.

It owes its existence to a long-standing tradition among its worshipers and those who manage to keep the Ancient Ones placated. Hadley rants that an undisclosed time ago, the Ritual was as simple as throwing a girl in a volcano. But as time went on, the desire for entertainment grew within the Ancient Ones and so they began changing the rules of the ritual that had to be performed verbatim or they would unleash their wrath. Soon the necessity of completing the ritual and carrying on humanity's existence was taken into the hands of The Organization, which stemmed from an ancient cult or multiple Ancient One worshiping cult groups all around the world who united to increase the chance of being successful each year.

Main Rules of the Ritual

While each ritual has its own specific guidelines for success, none are really touched upon in detail except for the North American divisions sacrament (which is controlled by The Facility). The American Ritual consists of the following specific rules:

The Ritual in Japan has a different set of rules, given the different cultural background. The shown scenario bears a close resemblance to the film Ringu. Some notable differences are:

As part of their Ritual, a natural disaster must take place. A large volcano scenario is shown taking place, using footage from the film Dante's Peak. 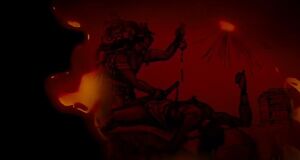 A primitive Aztec depiction of The Ritual. 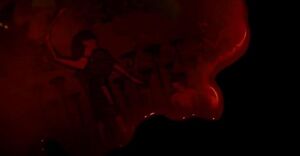 An ancient Egyptian depiction of The Ritual.
Add a photo to this gallery

Retrieved from "https://evil.fandom.com/wiki/The_Ritual?oldid=115747"
Community content is available under CC-BY-SA unless otherwise noted.