The Toluca Lake is a large lake and a location in the Silent Hill series. The lake is surrounded by forest, as well as having both Silent Hill and Shepherd's Glen right upon it's shores.

Though its precise size is unknown, Toluca Lake must be large enough to accommodate the construction of two mid-sized towns upon its shores, with those towns being a boat-ride apart from each other. Numerous hills encompass it, suggesting it may rest in a valley. In addition to hills, rivers and swaths of pine forest are also shown to be plentiful.

Once part of an area claimed as "holy land" by indigenous native tribes, the area containing the lake entered into the hands of European settlers in the late 1600s when the original inhabitants were forced out of the area.

With the towns of Silent Hill, Maine and Shepherd's Glen built right upon its shores, it was hoped that with income lost from coal mining when deposits ran dry, Toluca Lake would become a beacon of tourism.

Toluca Lake began to become a famous touristic destination even before the coal mines closed. Many tourist offices opened across the town of Silent Hill, as well as boat launchers, hotels and motels, giving the tourists many options to choose where to relax during their trips in the region.

The Lakeview Hotel, for example, was one of the most notables ones, and is built right on the shore of the lake, offering the tourists immediate access to the lake for swimming at warm periods.

Even with the lake being an attractive destination for many tourists, some infamous but mysterious maritime accidents occurred in the lake at past times. It is a possibility that the area has seen a steep decline in terms of tourist economy.

With the influx of visitors to the area over time, accidents, in particular boating accidents, were an inevitability.

The Toluca River is a river named after Toluca Lake and a water feature introduced in Silent Hill: Homecoming. Despite its name, Toluca River, according to the in-game map, does not appear to originate from or empty into Toluca Lake. It should be noted that because little of the area around the town of Shepherd's Glen is explored, it is impossible to know the origin or terminus of the Toluca River.

The significance of the river comes in the form of an event in Alex Shepherd's past. When Alex was eight years old, an accident occurred on River View Road. During that year, Shepherd's Glen and the surrounding area had experienced record-breaking rain, causing the Toluca River to rise 15ft or so above normal. Because of this, soil was eroded from under River View Road, weakening it. When a school bus, with Alex and other children on board, drove unto the weakened section of road, it was washed away. The bus was carried for a quarter mile before it became lodged under a bridge, and Martin Fitch happened upon the scene of the accident. At the risk of his own life, he aided in the rescue of the children and stayed with the young Alex, who had become stuck, until medical services arrived. 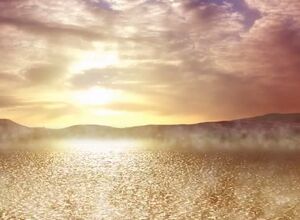 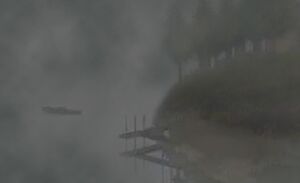 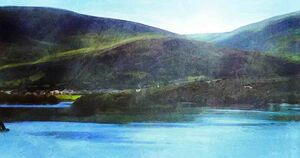 Toluca Lake and the town of Silent Hill, as seen in Sinner's Reward.
Add a photo to this gallery

Retrieved from "https://evil.fandom.com/wiki/Toluca_Lake?oldid=61110"
Community content is available under CC-BY-SA unless otherwise noted.